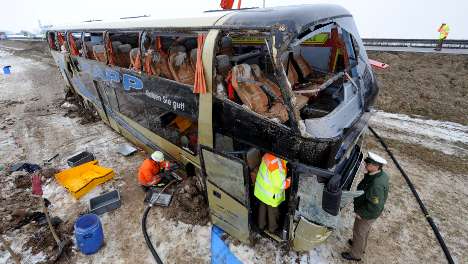 The bus had left Villingen-Schwenningen in the Black Forest with a group of 48 passengers on their way to a holiday to Croatia on Sunday morning when it came to the accident on the A8 near Ulm.

Police spokesman Christian Owsinski said the bus slid around three metres down the embankment, turning onto its side, and then continued sliding around 70 metres before coming to a halt.

Around 160 emergency personnel were called to the scene, from the fire service, police, rescue teams and even the army, and used 10 helicopters to ferry people to hospitals around the region.

Initial investigations into the cause of the crash would suggest that a coughing fit suffered by a passenger distracted the driver, causing the crash.

The two victims of the crash have not yet been named, but are understood to be a woman and a man.

The autobahn has been completely closed in the Munich direction.