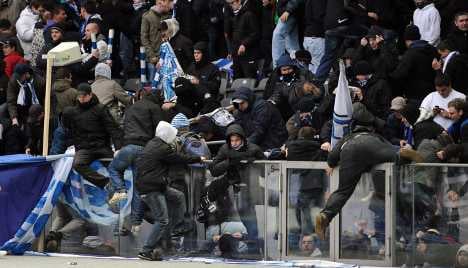 Hertha, which is hanging onto its bottom place in the Bundesliga by its figurative fingertips, had slipped closer to relegation after suffering a 2-1 home defeat to fellow strugglers Nuremberg who grabbed an injury-time winner.

Berlin, which remains five points adrift, had taken the lead when their Greece striker Theofanis Gekas scored only his third goal of the season just before half-time before Nuremberg hit back with two second-half goals.

Their second straight win lifts Nuremberg up to 15th in the table and out of the relegation zone.

Police made 30 arrests and four officers were injured after 100 Hertha fans rampaged through Berlin’s Olympic Stadium and damaged the home side’s bench after the final whistle.

Elsewhere, Bayern Munich suffered a Champions League hangover Saturday before Dutch winger Arjen Robben scored twice to seal a 2-1 win over strugglers Freiburg to put the hosts back on top of the Bundesliga.

After Tuesday’s away goals victory over Fiorentina, which saw them make the Champions League’s quarter-finals, Bayern were brought back down to earth by second-from-bottom Freiburg before Robben hit two second-half goals.

“Freiburg were very organised in the first-half, which made things very hard for us,” said Bayern coach Louis van Gaal.

“We changed things in the second-half and were dominant.

“The victory is very nice, but we got off the hook, so we can only be reasonably happy.”

Bayern went behind after 31 minutes when Freiburg striker Cedrick Makiadi rifled in a 20-metre shot at Munich’s Allianz Arena which left the home side’s keeper Hans-Joerg Butt no chance of preventing the goal.

The hosts looked lethargic before Dutch international Robben scored his ninth league goal of the season, and his second in two games having scored Bayern’s crucial second in Italy, when he drilled home a free-kick after 76 minutes.

And he then completed Munich’s fight-back when he converted an 83rd-minute penalty after Germany rising star Thomas Müller was fouled in the area.

The result puts Bayern top of the league and two points clear of second-placed Schalke 04.

Dortmund moved up to fourth and picked up its second straight win with a 4-1 victory at Bochum.

Argentina striker Lucas Barrios landed the hammer blow for Dortmund when he scored twice in three minutes midway through the second-half.

Hanover picked up their second consecutive win under new coach Mirko Slomka with a 2-1 win over Eintracht Frankfurt to go 16th.

Third-placed Bayer Leverkusen needs to beat Hamburg on Sunday to get its title hopes back on track after last weekend’s shock loss to Nuremberg while Bremen are at Hoffenheim.

It was Schalke’s third successive win and its eighth at home this season while Kuranyi’s timely strike was his 14th of the campaign.

Schalke, coached by Felix Magath, is trying to win what would be its first league title since 1958 while Stuttgart suffered only its second defeat since former Tottenham boss Christian Gross took over in December.