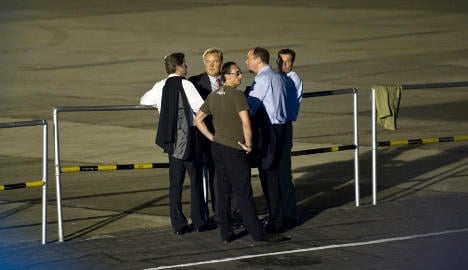 Westerwelle with Arntz, Mronz and others in Brazil on Friday. Photo DPA

A report in news magazine Der Spiegel on Saturday said that Jörg Arntz, head of the 06 Coordination working group at the top level of the Foreign Ministry, was until recently part of the Swiss group Mountain Partners.

The founder of the business group, Cornelius Boersch, has been on several trips with Westerwelle, to China and the Middle East this year – also accompanied by Arntz.

Boersch has donated more than €160,000 to the pro-business Free Democrats (FDP), which is led by Westerwelle.

Arntz’ work with the 06 working group includes coordination of foreign business promotion, the magazine said, although it could not gain a statement from the ministry on whether he had been involved in deciding who should go on the trips.

The Swiss business register shows that until last year, Arntz had a seat on the administrative board of a Swiss company founded by Boersch, Mountain Super Angel AG.

Before that he was personal assistant to Westerwelle, and also at times managed the business of the ‘Bürgerfonds’ – the association which collects funds for the FDP.

After the election last September, which catapulted the Free Democrats into government as junior partner to the Christian Democratic Union and its sister party the Christian Social Union, Arntz left the company and took up what Der Spiegel described as an influential position in the foreign ministry.

When asked what qualified the 34-year-old businessman to take on such a job, the ministry released a statement which said, “Mr. Arntz was previously a colleague of Dr. Guido Westerwelle. With reference to the work undertaken by the working group he heads, his appointment was made solely on the basis of the expert qualifications he earned then.”

Westerwelle is coming under sustained attack for the people he has taken with him on foreign trips, including his partner, events promoter Michael Mronz, and the head of a firm part-owned by his brother.