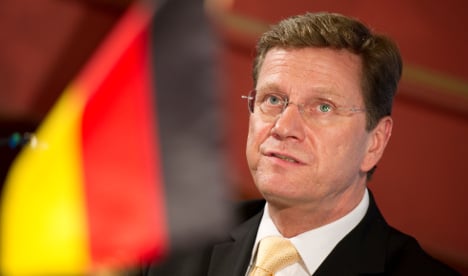 “We must be careful that democracy overall isn’t damaged by accusations such as the ones being construed,” Christian Lindner, the general secretary of Westerwelle’s pro-business Free Democrats, told broadcaster ZDF.

Lindner called the widespread criticism of the foreign minster a “defamation campaign” and urged “respectful behaviour among democrats, to which basic standards of propriety belong.”

Media reports have said that a business delegation accompanying Westerwelle, on a recent trip to China and Japan included the head of a firm part-owned by the foreign minister’s brother. Newspapers also said the group included a businessman who had made a €160,000 donation to the FDP, which is junior coalition partner to Merkel’s conservatives.

Westerwelle, Europe’s first openly gay top diplomat, has also come under fire for taking his partner, sporting events promoter Michael Mronz, on the Asian trip and to South America this week. Critics said it was unclear whether Mronz was taking part in his personal capacity as the minister’s partner or as a successful businessman included in the industry delegation.

The accusations of favouritism have likely been fuelled by Westerwelle’s recent controversial rhetoric about Germany’s welfare system, Lindner told ZDF.

And opposition politicians didn’t hold back this week.

The socialist Left party’s deputy parliamentary leader Gesine Lötzsch accused Westerwelle of being “corrupt” and working to make his partner, friends and donors “even richer.”

On Thursday, Westerwelle angrily responded to the criticism, accusing the opposition of seeking to score political points “with personal attacks against me and my family.”

Merkel’s spokesperson Sabine Heimbach followed with tepid support on Friday, saying: “The chancellor is convinced that ministers, and in this case the foreign minister, take their decisions in accordance with the rules.”

The FDP agreed to form a coalition with Merkel’s conservatives late last year after spending more than a decade in opposition, but governing has been anything but smooth sailing since for Westerwelle.

The coalition parties have failed to see eye to eye over tax cuts, while Westerwelle sparked reams of media coverage last month for likening Germany’s welfare state to the “decadence” of the last days of the Roman Empire.

In January it emerged that the FDP had received a €1.1-million donation from a hotel proprietor shortly before the government agreeing tax cuts for the sector.

Poll ratings meanwhile have fallen sharply for both the FDP and Merkel’s Christian Democrats, setting the scene for a close fight in state elections in May in North Rhine-Westphalia. A loss for the CDU/FDP government there could cause the centre-right alliance to lose its majority in the upper house of parliament, the Bundesrat.