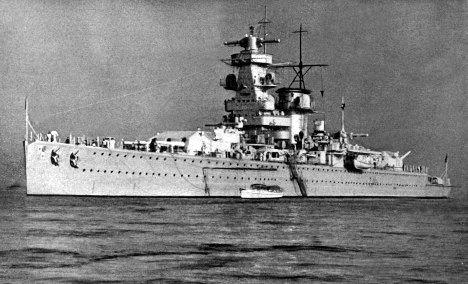 “We always proposed a serious historical and cultural destiny” for the remains of the Graf Spee while “contemplating fair compensation” for the work and investment made to recover its remains, Alfredo Etchegaray, the businessman, told AFP.

During a visit to Montevideo this week, German Foreign Minister Guido Westerwelle said his desire was “to prevent the remains of the symbols of the Nazi regime from becoming commercialized.”

“What we want really is to reach a constructive deal,” he said, adding that Germany was prepared to support the presentation of the remains “in a historical context, like a museum.”

Two years earlier, they had come up with a 27-tonne rangefinder used to direct the ship’s cannons. And in 1998, a 155 millimeter (six-inch) gun from the ship’s secondary armament was salvaged.

The underwater salvage group planned to bring up more cannons and other pieces of the Graf Spee, but were barred from doing so by a Uruguayan government decree.

After the recovery of the Nazi eagle, with its outspread wings and swastika, Germany sent a note to the Uruguayan foreign ministry claiming ownership of the Graf Spee and opposing continuation of the salvage work.

Etchegaray, who had received permission from the Uruguay government to undertake the salvage work, has spent $2.5 million over the past 25 years scouring the Rio de la Plata estuary for sunken ships.

The Graf Spee was scuttled by its captain just outside Montevideo harbor where it had gone for repairs after the first major naval battle of World War II.

The Nazi warship was used to raid commercial shipping in the Atlantic until it was intercepted by two British cruisers and one from the New Zealand navy off Montevideo.

Etchegaray claims the wreck was sold in 1940 by the then German ambassador Otto Langmann to Uruguayan Julio Vega Helguera, who concluded the deal as an undercover agent for the British government for the sum of 14,000 pounds.

The sale is recorded in the diplomatic dispatches preserved in the Public Record Office in London, a copy of which was provided to AFP by Etchegaray.

“The British took only eight items from Graf Spee” to examine their technology and design, he said.

Etchegaray said that in 1973 Uruguay issued a decree claiming ownership of all shipwrecks in its waters.

“For the past four years I have been proposing a museum… or an auction with a prequalification of interested parties and a guarantee of a historic-cultural destination for the (eagle),” he said. “We all want a deal that is constructive and sensitive for the remains of the Graf Spee,” he said.

The Graf Spee, halfway between a battleship and a heavy cruiser, was designed to outrun larger ships that might have sunk it, and outgun smaller but faster vessels.

But after capturing and sinking nine British cargo ships without loss of life following the outbreak of war, Captain Hans Langsdorff allowed himself to be trapped by the British force on December 13, 1939.

In the ensuing Battle of the River Plate, Graf Spee’s 11-inch guns crippled the British heavy cruiser Exeter but the German ship suffered irreparable damage from the other two cruisers, the Ajax and Achilles.

Taking refuge in Montevideo, the Graf Spee was ordered to leave within 24 hours by the Uruguayan authorities. Facing destruction by the British ships waiting off the mouth of the Plate, Langsdorff blew up his vessel in the middle of the estuary on December 17.

Langsdorff, praised as a considerate gentleman by the crews of the British ships he had captured, shot himself two days later in a hotel room in Buenos Aires, after laying the flag of the old imperial German navy on the floor.