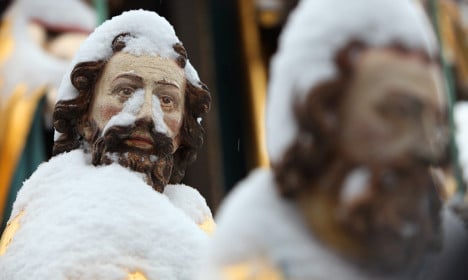 The last snow on a church monument in Nuremberg. Photo: DPA

Locations above 400 to 600 metres in altitude will see snow accumulation of between 10 and 30 centimetres by Monday, and high winds could also lead to drifting, the DWD statement said.

Residents south of the Main and Mosel rivers will see heavy cloud cover on Thursday, while snow will begin to fall in parts of the southern states of Baden-Württemberg and Bavaria. The weather in central and eastern regions will be a bit friendlier, though, with brief patches of sunshine and temperatures between one and six degrees Celsius.

More snow will fall overnight as temperatures fall well below freezing in southern regions near the Danube River.

On Friday central and northern Germany will also see snow, though rain is more likely for low altitude areas, the DWD said. The mountains in the south will remain cold but mostly clear, though, with just a few intermittent snowflakes.

Conditions will be variable on Saturday with more snow and rain, though some sunshine may peek through the clouds as the day wears on. High altitudes will remain below freezing, while central areas could see temperatures up to six degrees Celsius, the DWD reported.