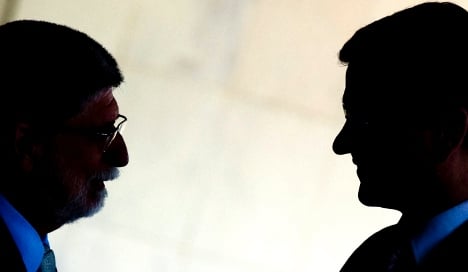 Brazilian Foreign Minister Celso Amorim and his German counterpart Guido Westerwelle said after talks there that they agreed it was crucial to prevent the creation of a new nuclear power, but clashed on the issue of sanctions.

Tehran must be given further opportunities to prove its willingness to cooperate with the United Nations, Amorim argued.

“We want clarity and transparency for the international community over Iran’s nuclear program, but what we primarily see is Iran’s willingness to negotiate,” he told reporters when asked about potential UN sanctions against the Islamic republic.

“We want a peaceful solution to the dispute without a great cost to the people of Iran.”

After the talks in Brasilia, Westerwelle said he saw clear differences in the assessment of the threat posed by Iran’s nuclear activities.

“We live on different continents and the distance to Iran between Brazil and Europe is great,” Westerwelle said, saying European powers were “deeply worried” by Tehran’s sensitive nuclear work.

“We remain ready to negotiate. But since we have had the impression that our outstretched hand has nothing to grasp… we will have to talk about other measures.”

Brazil is reluctant to back a US-led drive for a fourth set of sanctions on the Islamic republic, saying the move would likely be “counterproductive.”

It is a current voting member on the 15-strong United Nations Security Council, though not one of the five permanent veto-wielding members: Britain, China, France, Russia and the United States.

Adoption of a resolution requires at least nine votes from the council and no veto from the permanent members. Diplomats say Brazil could abstain in a Security Council vote.

Germany belongs to the so-called P5-plus-1 group which has for years spearheaded efforts to rein in Iran’s nuclear program, which the West fears masks a drive for a nuclear weapon.

The minister told reporters after the meeting that Brazil had “enormous authority around the world” that was needed to confront threats to global security.

“We must work as closely as possible with countries like Brazil if we want to be successful,” he said.

After their talks, Amorim and Westerwelle both expressed optimism that the outlines of a long-stalled free trade deal between the European Union and South America’s Mercosur bloc could be hammered out by the end of the year.

Brazil is the fourth and final country on Westerwelle’s Latin American tour, which began Sunday with an aid delivery to quake-stricken Chile and continued with stops in Argentina and Uruguay.

Delegation sources said Jorge stressed that Brazil wanted to work closely with Germany, which hosted the soccer World Cup in 2006, in preparing for its own turn staging the event in 2014.

He said Brazil sought German cooperation in particular in modernizing its stadiums with solar technology.

Westerwelle said German firms were strongly interested in developing the civilian use of nuclear energy in Brazil as well as renewable energy.

Germany is Brazil’s fourth biggest trade partner after China, the United States and Argentina, with trade volume in 2008 of €18.1 billion.