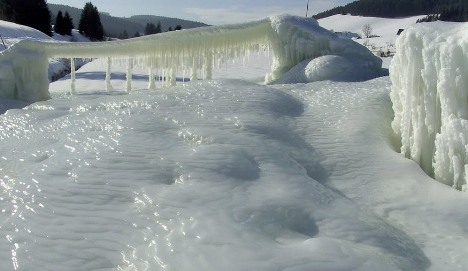 A team led by Eduard Heindl, a professor in e-business at Furtwangen University and also a doctor of physics, has managed to make two sheets of ice about two metres thick and covering 1,000 square metres at about 850 metres elevation.

Using sprinkler systems that pump water from nearby springs, Heindl says he has proved in principle that artificial glaciers can be grown at a low cost.

“The data we wanted to collect was: how fast does it melt? We’ve found that the ice takes four times as long to melt at 10 degrees as it took to freeze at -10 degrees. That was enough to tell us that this idea works,” he told The Local.

Even into March, the two glaciers were still growing now, he said. He presented his project last weekend at the Extreme Weather Congress in the German town of Bremerhaven.

Heindl said he planned two further trials in the Alps next winter at Zermatt and Grimsel in Switzerland at an elevation of 2,000 metres. Here, he planned to top-up existing glaciers that were melting because of climate change.

He said regional tourism operators and farmers were “impressed” at his creations.

“They are really having problems with summer heat and they are looking for solutions,” he said. “These are a way to maintain glaciers and store water for the warmer months when the run-off provides a water source. It’s much cheaper than building dams.”

Two Swiss firms were keen to come in as investors, Heindl said, though he declined to name them because the deals were not yet finished.

Every one square kilometre of ice with a thickness of one metre would cost €100,000 in electricity, assuming the water needed to pumped 500 metres uphill from natural water sources. He said this was 50 times less energy than that needed to run snow-making machines.

Christopher Krull, head of the Black Forest Tourism Board, said the mini glaciers should help attract visitors to the area. “If they can remain long enough into the spring and the summer, they should be an attraction. If people come in spring time, they’ll find a nice place to visit,” he said.

The plan got only a trickle of support from glaciology experts, however.

Professor Matthias Huss, a glaciologist at the University of Fribourg in Switzerland, said the energy needed to pump the water uphill in the Alps would outstrip any benefit. These were not glaciers but “ice blocks,” he said.

“You’d expend so much energy getting the water up there, you’re not doing anything to help with global warming,” he said.

But he added: “If the goal is simply to raise awareness of glaciers and make the world think about global warming, then it has value. Glaciers are one of the best ways to show that the climate is warming and that there is something wrong.”

Peter Lemke, from the Alfred Wegener Institute for Polar and Marine Research, even branded the idea “crazy.”

“Glaciers are an indicator of climate change but they do not have any effect on it. It’s worth it for the fun and the tourism, and people are probably now visiting the area,” Lemke said. “But it’ll be a big surprise if the glacier lasts as well next year. It only worked this time because the winter was unusually cold.”

Even despite the bitter cold this winter, Lemke expected the Black Forest glaciers to have melted entirely by June.

Irmgard Juen of the Innsbruck Tropical Glaciology Group described the plan as ”nonsense.”

”Nevertheless, it might be a way to conserve the ice on a glacier for some more years and maybe it will also be an alternative for some skiing areas,” Juen said. “Although I am not sure how attractive it will be to sky on pure ice.”