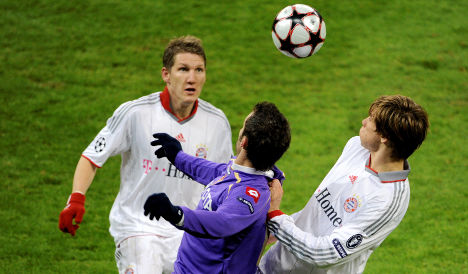 Having won the first leg 2-1 in Munich thanks to a controversial goal from Miroslav Klose, Bayern went through on the away goals rule in Fiorentina after Arjen Robben and captain Mark van Bommel scored in Tuesday’s 3-2 defeat.

The result meant that the Bavarian giants, currently riding high at the top of the Bundesliga, beat Fiorentina 4-4 on aggregate. But Schweinsteiger was wary about the draw for the last eight on March 19.

Arsenal blasted Porto away 5-0 on Tuesday to make it through to the last eight, while other giants like Barcelona, Real Madrid, Manchester United and Chelsea play their last-16 second legs this week and next.

“Maybe we’ll avoid the really top teams at this stage,” said a hopeful Schweinsteiger. “We’re delighted to be through, as that was our target. Let’s see what happens in the draw.”

Despite scrapping through, Bayern coach Louis van Gaal acknowledged reaching the last eight of European football’s most lucrative competition was all important.

“We’re through, which is what matters in the Champions League,” said van Gaal, whose side were 1-0 down at half-time. “I always had a good feeling about it. “At half-time, I told my players to stay calm, be patient and keep the ball on the floor.”

Bayern’s Germany striker Mario Gomez is expected to be out for two weeks after tearing his right calf muscle in the first-half, but despite his absence captain van Bommel said he never thought his side would go out.

“We had a few nervy moments in front of our goal, but I don’t think we were that bad,” said the Dutchman. “I never had the feeling we’d be knocked out here. Fiorentina only got into the game because we made mistakes. But we kept our cool and deserve to go through.”

But Bayern’s Italian opponents were not happy at their exit, as their defeat was thanks primarily to Klose’s controversial 89th-minute goal in the first leg, which replays showed was yards offside.

“It’s a great shame the goal from the first leg proved so important but my players should not feel frustrated,” said Prandelli. “Clearly we’re upset. But when playing at this level and defeating Bayern Munich, you have to be proud.”