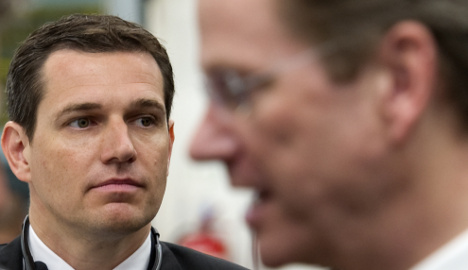 But Westerwelle dismissed suggestions that Mronz was using the trip for his own gain.

Although his partner is paying his own way according to Westerwelle, his presence has raised questions about his access to key people via the minister.

Mronz is an event manager who is active in the sports industry and Brazil, which is part of Westerwelle’s South American trip. The country is hosting the Football World Cup in 2014 and the Olympic Games 2016.

“For me, the demands of German business interests overseas are a foreign policy priority because it is about German jobs,” Westerwelle said. “That’s why it’s good that a high-ranking business delegation accompanies me.”

“I’m happy that Mr Mronz is taking the time to accompany me at his own cost in order to inform himself about, and engage in, social projects in the region. We want that and we’ll continue doing it.”

Mronz, who is also a director of the charity Ein Herz für Kinder, told daily Bild: “Whenever I have the time, I would always like to accompany Mr Westerwelle on his trips, to engage with social programmes for children.

“I would like to campaign for the most vulnerable of the world’s citizens, the children. Precisely because we have no children of our own, I like to have a heart for children.”

Donors to Westerwelle’s Free Democrats are also travelling with the minister.

His wife had occasionally accompanied him on trips, usually to European Union events to which partners were specifically invited.

Thomas Oppermann, SPD parliamentary group whip, also raised concerns about the trip. ”I have serious doubts whether Westerwelle is actually qualified to be foreign minister,” he told the Rheinische Post daily. “We’re getting the impression that he’s not up to the job.”