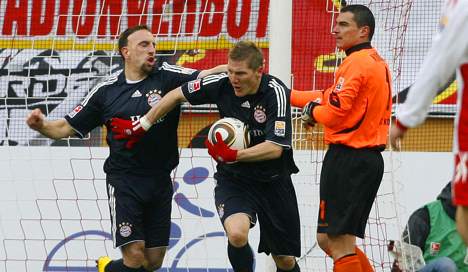 Bayern went behind on 32 minutes when Cologne’s ex-Munich striker Lukas Podolski drilled in an indirect free-kick which flew into the top left-hand corner of the net after deflecting off Butt’s hands.

Podolski’s Germany teammate Bastian Schweinsteiger hit a second-half equaliser on 58 minutes to make sure Munich left Cologne with at least a point, but Butt said the guests should not have conceded the equaliser.

“The ball wobbled (in mid-air) when we went 1-0 down, but I should have been able to hold on to it,” said the 35-year-old. “We gave away the two points in the first-half. We hardly created any chances and left ourselves with work to do at the back. In the second-half, we could still have won the game.”

Bayern coach Louis van Gaal, whose team is now unbeaten since November, said his side had not created their own luck. “We played the way we wanted to in the first 20 minutes,” said the Dutchman. “After that, we did too much in midfield where there were many Cologne

players and we were not very intelligent.”

“You have to create your own luck from time to time and we didn’t do that for the first 30 minutes,” the veteran coach said.

Bayern play Fiorentina in the second leg leg of their last 16 Champions League tie on Tuesday where they hold a 2-1 advantage from the earlier game in Munich.

But goal-scorer Schweinsteiger admitted they would have faced the trip to Italy with more confidence had they defeated Cologne. “We did not create enough chances to beat Cologne,” said the Germany midfielder.

“We did not play as simply as we wanted to and we made a few mistakes. We knew Cologne would build a brick wall for us to break down and so it proved. But we were good enough to take the three points and should have done so,” he said.