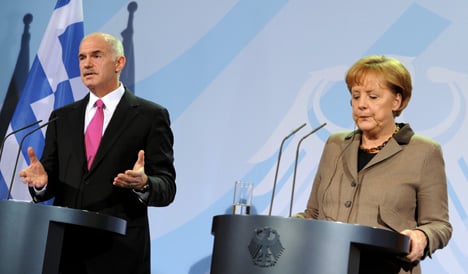 “Greece has not asked for financial assistance. The stability of the eurozone is assured today. As a result, the question (of aid to Greece) is not being asked … I am even optimistic that it will not be asked,” Merkel said.

The Greek parliament on Friday approved a third round of austerity measures aimed at reining in the country’s gaping budget deficit and restoring trust on financial markets in its solvency.

The €4.8-billion ($6.5-billion) package was enough for Athens to be able to raise an urgently needed €5 billion through a bond issue on Thursday, albeit at a painful six-percent-plus rate of interest.

Merkel praised the measures but said that Greece “must do more than rein in its budget deficit,” such as modernising its economy. To this end, she said the two countries had agreed to work more closely together.

Europe’s biggest economy is widely seen as the most likely candidate to help prevent a Greek default, which would be disastrous for the 16-nation eurozone. But there is huge popular opposition in Germany against such a move.

Newspapers have carried angry editorials about alleged Greek corruption and wasteful spending, with Merkel’s political allies even suggesting Greece should sell some islands to free up some cash. Papandreou said on Friday this was not an option.

Such suggestions have irked Greek politicians and newspapers, with some claiming that Germany still owed Greece money from World War II, accusing the Germans of stealing all the gold from the Greek central bank.

Papandreou and Merkel both moved to soothe tensions on Friday.

“We haven’t asked the German taxpayer to bail us out, to pay for our pensions and our holidays. That is not fair,” Papandreou told the Frankfurter Allgemeine daily in an interview.

“Nor do Greeks have corruption in their genes any more than Germans have National Socialism (the Nazi ideology) in theirs. It is very dangerous when we use stereotypes like this.”

Merkel said on Friday that “everything to do with negative emotions is not helpful.

“We should find other solutions to our problems,” she told reporters.

Behind the scenes, Germany and other European countries were reported to be working on contingency plans to prevent Greece defaulting on its debts, something which would be disastrous for the eurozone.

Merkel also said that the European Union, as well as the Group of 20 nations, had to do more to tackle “speculators profiting from the difficult situation in Greece.

“We will go jointly to the European Commission and bring it into the G20 reform process (of financial regulation reform), that speculative instruments, in particular of derivatives, must be tackled whenever they are used to speculate against states,” she said. “Technically this will clearly not be easy but it is politics that calls the shots.”

Papandreou’s visit to Berlin followed talks earlier Friday with Luxembourg’s Jean-Claude Juncker, who acts as the formal head in finance matters for the 16 nations that share the euro.

On Sunday, he was was due to meet French President Nicolas Sarkozy and next week US President Barack Obama.