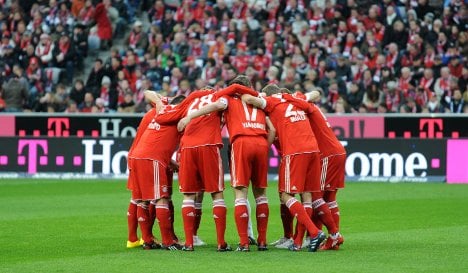 A scorching goal from French striker Franck Ribery was enough for Bayern to beat fourth-placed Hamburg 1-0 last Sunday and take the Bavarian giants top for the first time since winning the title in 2008.

Leverkusen, who had been neck-and-neck with Bayern for a month and just ahead on goal difference, were held to a 0-0 draw at home to Cologne – Bayern’s opponents on Saturday.

“We expected Leverkusen to slip up, of course, and they did us the favour,” Bayern chairman Karl-Heinz Rummenigge said.

Rummenigge’s team looks stronger on paper, having lost only two league games this season, and not since September, while 14th-placed Cologne have failed to win since an own goal saw them through against Frankfurt on January 30.

Bayern will travel to Cologne without Argentinian defender Martin Demichelis, out for three weeks after colliding with Michael Ballack’s knee in Wednesday’s 1-0 victory over Germany. He has multiple facial fractures.

Leverkusen and Germany goalkeeper Rene Adler will be keen to keep a clean sheet as his team take on second-from-bottom Nuremberg away on Sunday, after his disastrous slip-up led to Argentina’s only goal on Wednesday.

The other main contender for the Bundesliga title is third-placed Schalke, four points behind Bayern and two points shy of Leverkusen. The next-closest, Hamburg, are 12 adrift of the leaders Bayern.

Schalke, with one defeat in their last 10 games, travel to seventh-placed Eintracht Frankfurt on Saturday, a side which manager Felix Magath is wary of underestimating.

“Eintracht is a very close-knit team. Every player is there for the others,” Magath said. “It will be a very difficult game.”

In other matches, Hamburg, who have sorely missed Ruud van Nistelrooy, take on bottom-placed Hertha Berlin at home.

The Dutchman returned to training on Thursday, but coach Bruno Labbadia was optimistic he will be fit for the Hertha clash.