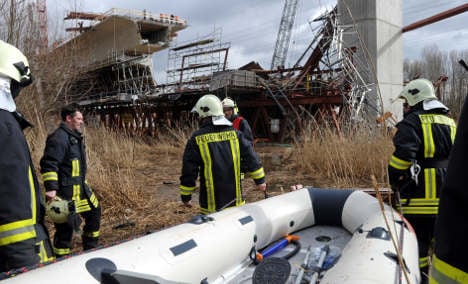 The accident occurred around 10:30 am along a stretch of a new high-speed ICE Erfurt-Halle/Leipzig train line in the state of Saxony-Anhalt between Halle and Döllnitz. Workers there are building an 8,600-metre bridge over a floodplain there.

According to the police, five workers were rescued with minor injuries while another six workers were trapped beneath the wreckage for some time before rescue services were able to dig them out.

Meanwhile rescue efforts were hampered by high water in the floodplain due to snow runoff, and some fire fighters were forced to approach the accident scene with life rafts and a hovercraft.

Those trapped under the wreckage suffered serious injuries.

The cause of the accident is still under investigation.