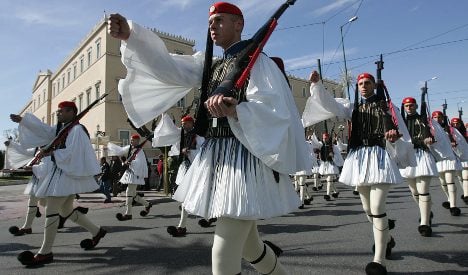 Greek bond prices rallied this week on a report that Europe’s top economy was considering coming to the aid of debt-burdened Greece, as Prime Minister George Papandreou prepares to hold talks with Merkel in Berlin on Friday.

But the German chancellor denied any such plan was in the works, saying “there is absolutely no question of it.”

“We have a (European) treaty under which there is no possibility of paying to bail out states in difficulty,” Merkel told ARD public television.

Germany has repeatedly denied talk of a bailout for Greece, further fuelled this week by a meeting between Papandreou and the head of Deutsche Bank.

“Right now we can help Greece by stating clearly that it has to fulfil its duties,” said Merkel, adding that Greece had to “show great courage” in order to resorb its deficits and restore its “lost credibility”.

Greece’s Socialist government has pledged to cut the deficit by four percentage points of gross domestic product to 8.7 percent this year, but there are doubts that the recession-hit country will be able to meet this goal.

Merkel warned Athens now had to “set this decision in motion”, as she acknowledged that the current crisis was “certainly the most difficult period” since the euro was created in 1999.

“I hope the markets will trust in the efforts deployed by Greece,” she said.

The chancellor also ruled out providing support to Greece in the form of state guarantees to the banking sector, arguing that it would amount to aid.

Greece is expected this week to announce new measures to limit state spending, which could include bolder benefit cuts and a two-percent hike in sales tax according to reports. The measures are set to coincide with the arrival of the European Union’s economic and monetary affairs commissioner Olli Rehn in Athens on Monday.

The head of the group of ministers that oversee the eurozone warned Sunday that Greece must step up its spending cuts and not expect other European taxpayers to pick up the bill for its past mismanagement.