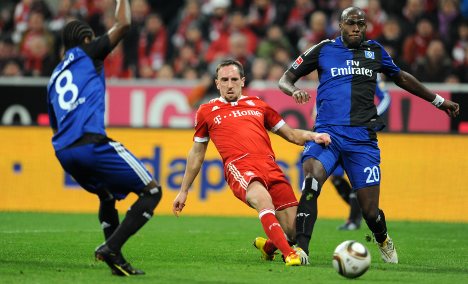 “It is better to be top of the table, of course,” Dutchman van Gaal said after a stunning goal from France international Franck Ribery enabled Bayern to see off fourth-placed Hamburg 1-0 on Sunday.

“Bayern should normally always be at the top,” he added.

Following a recent return to form under van Gaal, Bayern caught up Bayer Leverkusen at the top of the table a month ago but since then, the two rivals have been neck-and-neck, with Bayern second on goal difference.

But Leverkusen blinked first this weekend against heroic Cologne which kept them to a 0-0 draw at home on Saturday. The fact that this was Leverkusen’s 24th game unbeaten, a new German record, counted for little.

“This has been a great weekend for us,” Bayern chairman Karl-Heinz Rummenigge said. “We expected Leverkusen to slip up, of course, and on Saturday they did us the favour.”

And he is determined that Leverkusen are not going to get a look-in again.

“Our target is quite clear, as we have said right from the beginning, we want to be German champions. We want to bring the title back to Munich this year, come what may. And we’re right on track.”

On Sunday, Bayern had more chances than Hamburg in their home stadium as former Chelsea winger Arjen Robben and midfielders Thomas Müller and Bastian Schweinsteiger piled on the pressure.

It took until the 78th minute for Bayern to find the back of the net, however, with Ribery, in bright yellow boots, firing a bullet past Ivorian defender Guy Demel to beat goalkeeper Wolfgang Hesl.

Hamburg sorely missed their new signing, former Manchester United striker Ruud van Nistelrooy, absent through injury, although they had a handful of good chances themselves.

The result put Bayern two points clear of Leverkusen at the top, but snapping at both teams’ heels, four points off the lead, are Schalke, who saw off Dortmund 2-1 on Friday.

Stuttgart meanwhile maintained their fine run under coach Christian Gross by coming from behind to beat Eintracht Frankfurt 2-1 at home on Saturday, lifting them up to eighth in the table.

Stuttgart’s Brazilian-born striker Cacau continued the form that saw him picked for the squad for Germany’s World Cup warm-up friendly against Argentina on Wednesday, scoring twice in four minutes just before the break.

In Sunday’s other game, Hannover suffered their ninth straight defeat as defending champions Wolfsburg, fresh from their passage into the last 16 of the Europa League last week, won 1-0 through Bosnian midfielder Zvjezdan Misimovic.

Hannover have now gone 13 games without a win, and now find themselves second to last in the table. Only the hapless Hertha Berlin, who went down 2-0 to Hoffenheim on Saturday, are below them.

Werder Bremen meanwhile capped a fine week by winning 2-1 at 10-man Mainz on Saturday to move to within a point of the European qualifying positions, with Germany midfielder Tim Borowski and substitute Sebastian Prödl the scorers.

Bremen booked their place in the last 16 of the Europa League with a 4-1 win at home to Dutch side FC Twente on Thursday.

Borussia Mönchengladbach drew 1-1 at home to Freiburg, while Nuremberg climbed one place to third-bottom after securing a goalless draw at Bochum.