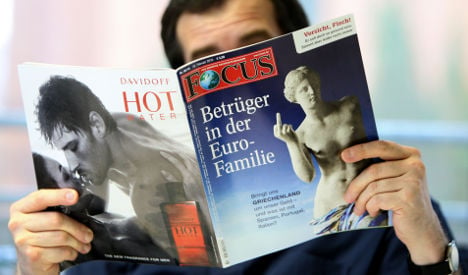 “There is clearly a slight disagreement” between Berlin and Athens, Stefan Bredohl, a Foreign Ministry spokesman, told a regular briefing.

Nevertheless, he added that the German ambassador in Athens had held an “amicable” meeting with the president of the Greek parliament in which these disagreements had not played a role.

The ambassador sought to offer “clarification” to Greece after a Greek consumer association, enraged by the cover of a German magazine, called for a boycott on German goods.

The cover of this week’s Focus magazine showed the ancient Greek statue the Venus de Milo making an obscene hand gesture with the caption: “A cheat in the euro family.”

The association, Inka, demanded an apology from Chancellor Angela Merkel, who will hold clear-the-air talks with Greek Prime Minister George Papandreou in Berlin next Friday.

The talks will cover “all topics relating to bilateral relations, European policy and other international questions,” Sabine Heimbach, a government spokeswoman said, adding that “current events” would also be tackled.

Adding to bilateral tensions between the two countries is a decades-old spat over war reparations, reheated by Athens as concerns over its debt mountain sent the euro spiralling downwards on the foreign exchange markets.

The mayor of Athens, Nikitas Kaklamanis, said: “You owe us 70 billion for the ruins you left behind.”

Greece’s government overspending reached 12.7 percent of output in 2009 as the global downturn sent public deficits through the roof, putting government bonds under pressure, weakening the euro and pushing the eurozone into crisis.

Papandreou warned on Friday that his country risks bankruptcy unless strict austerity measures were enacted fast to cut the deficit.