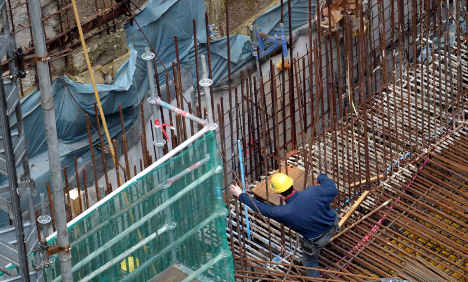 The dramatic plan is meant to ensure the central Heumarkt does not collapse by bolstering concrete walls with counter pressure from some 14.5 million litres of water. The city said there was no danger the site could overflow and flood nearby buildings.

Underground building experts have already prepared the site with special scaffolding to hold hoses, which will be used to flood the site with river water on Saturday afternoon.

So far the Rhine has been rising an average of two centimetres per hour, floodwater experts reported on Friday.

Authorities have already built a separation wall between the Rathaus and Heumarkt station construction sites in preparation for the emergency flooding, a measure meant to keep the water from flooding the entire metro tunnel.

The decision to take action follows numerous reports of shoddy building practices on the underground line.

Investigators into the deadly March 3, 2009 collapse of the city’s historic archive building believe contractors cut corners on the supporting walls of the metro tunnel not only near the construction site near Waidmarkt, but also near the Rathaus and Heumarkt stations.

An additional 28 falsified records for underground metro construction at various sites across the city have been discovered, pointing towards organised crime, an investigation insider told daily Kölner Stadt-Anzeiger last week.

The building scandal spread this week to the nearby city of Düsseldorf, where experts have discovered falsified protocols and metal anchors that had not been installed properly at six different underground metro construction sites on the U-Bahn Wehrhahn line.

Düsseldorf city building department head Gregor Bonin told journalists there were clear indications that similar incidents were perpetrated by the same people as in Cologne – employees of a company called Bilfinger Berger – and those under suspicion have been suspended from their duties.

Because no safety danger has been detected in relation to these practices, construction of the U-Bahn line will continue as planned, he said.

Cities that may have worked with Bilfinger Berger on U-Bahn construction in the last 40 years have been asked to file reports to the investigating authorities.