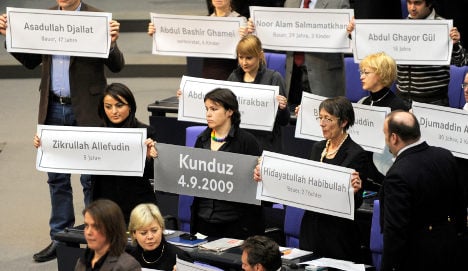 Some 429 parliamentarians voted for the new mandate, while 111 voted against it and 46 abstained.

The vote – a ratification of the plan announced by the government late in January – was overshadowed by the dramatic expulsion of the entire Left party after its MPs held up signs with the names of Afghans who died in a controversial German-ordered air strike near Kunduz.

Though the parliamentary rules should have therefore barred them from the vote as well as the debate, they were readmitted for the vote because of the importance of the issue.

Most of the centre-left opposition Social Democrats’ MPs voted for the mandate along with the conservative coalition, while most of the Greens abstained. The Left voted against it.

The new mandate is partly aimed at strengthening Germany’s civil reconstruction help in Afghanistan but it also allows for the increase in troop numbers from the present 4,500 to 5,350. Some 500 extra troops were definitely be sent and a further 350 will be available as a “flexible reserve.”

“For us it is about individual people, not about general chatter,” Lötzsch said.

Bundestag President Norbert Lammert threw The Left’s MPs out of the chamber after they held up signs showing the names of victims of the Kunduz air strike ordered last September by German commander Col. Georg Klein.

At least 140 people were killed in the bombardment of two petrol tankers that had been hijacked by the Taliban, and many of the dead were believed to be civilians.

Lieutenant-Colonel Jörg Langer of the Military Command Centre in Potsdam told broadcaster RBB soldiers would spend more time mixing with the Afghan people and less time in more secure field camps – an engagement that will leave them more vulnerable to attacks from Taliban insurgents.

“In future, it will certainly change, that soldiers will actually spend more time outside the field camps so that they can give the people a stronger sense of security,” he said.

Langer said the goal of the new engagement was to build the Afghan people’s trust in the NATO forces.