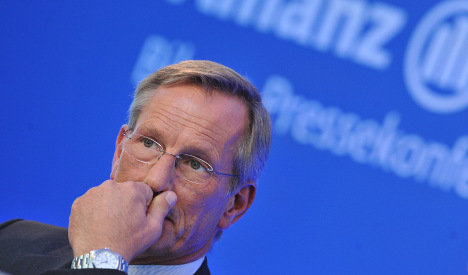 Chief executive Michael Diekmann said the group forecast an operating profit of around the same level as last year, or €7.2 billion.

“I don’t want to appear too conservative… but one big catastrophe can erase” ambitious targets, he said while presenting annual results in Munich, southern Germany.

The group posted a 2009 net profit of €4.3 billion and said it slept soundly despite being owed billions by heavily indebted eurozone states.

Allianz, Europe’s largest insurance group by gross premium income, reported a net loss of €2.44 billion in 2008 and analysts polled by Dow Jones Newswires had forecast a profit of €4.34 billion this time around.

The results in 2008 were hit by loss-making Dresdner Bank, which Allianz has since sold to Commerzbank, the second biggest German bank.

The insurer said in a statement that it made a profit of €1.08 billion in the last three months of 2009, which it considers a better reflection of its performance, compared with a loss of €3.11 billion in the same period of 2008.

That result was also slightly below an average analyst forecast of €1.12 billion.

Allianz board member Paul Achleitner told a news conference that the group had total exposure of €11.3 billion to eurozone countries that have become objects of concern owing to high public deficits and/or levels of debt.

“Our portfolio is very diversified,” Achleitner said. “We can sleep soundly.”

The group’s debt portfolio is concentrated in France, Germany and Italy, with the latter accounting for €7.6 billion of a total €130.5 billion in 20 countries around the world.

Spain accounts for another €1.8 billion, while Allianz holds around €900 in Greek debt and 500 million in Ireland.

Portugal, Greece, Ireland, Italy and Spain are currently seen as countries at risk by many financial experts.

Full-year revenue rose by 5.2 percent to €97.4 billion, of which €23 billion came in the final three months of the year.

The insurer did not give a detailed outlook for 2010 owing to “a very volatile market environment,” the statement quoted Diekmann as saying.

Allianz took a hit last year from its casualty insurance activities, in part owing to an earthquake in Italy and storms in France, but posted better results in health and life insurance.

Shares in the insurance group gained 1.15 percent to €83.02 in midday trading on the Frankfurt stock exchange, while the DAX index of leading stocks was 0.09 percent lower overall.