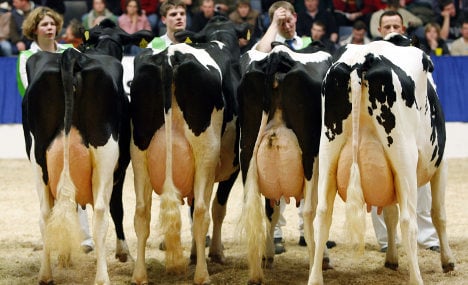 The beautiful bovines and their owners are competing for cash prizes at the 37th annual Schau der Besten, or “Show of the Best,” farmyard pageant on Thursday and Friday.

If they’ve made it this far, the brown and black-spotted cows have beat out some 410,000 competitors.

“It’s really an honour,” farmer Heinz Landwehr said. The 60-year-old is competing with his cow Nadja, who has been primped, hairsprayed and fluffed up for the event organised by stock breeding firm Masterrind.

“She has a good build and beautiful udder. But the others are also very good,” Landwehr said.

The cows in this contest are so beautiful that breeders and farmers have come from as far as China to see them prance before the judges.

“We want to see the wonderful German animals a bit closer,” said Luo Baojing, the leader of a Chinese delegation attending the event, adding that they are more familiar with American and Canadian cows.

“The German ones are much more beautiful,” he said.

Part of their preparation includes seeing a cow hairdresser, such as Irishman Denis O’Neill, who charges farmers €50 to spruce up their bovine betties with hairspray and gel.

“It should be as straight as possible and no hair should stick up,” he said.

While the farmers themselves may not pay €50 for their own hairdos, the money is well-invested if they win. Prizes range from €3,000 to €15,000, and top winners get a special breeding certificate.

“It’s very important for the cows to present themselves proudly,” Strassemeyer said. “That is sort of like models on the runway who are attractive through a certain coolness.”