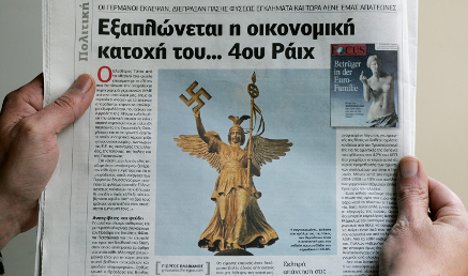 “I must reject this criticism,” Andreas Peschke, a spokesman for the German Foreign Ministry, said at a scheduled briefing in Berlin, referring to the claim made earlier by Athens Mayor Nikitas Kaklamanis.

In a complaint to Chancellor Angela Merkel over a front cover of German magazine Focus showing a statue of Venus making an obscene hand gesture, Kaklamanis wrote: “You owe us 70 billion for the ruins you left behind.”

Peschke on Wednesday said Germany had already paid more than €4.4 billion under formal war reparations and compensation for slave workers, adding: “A discussion of the past is not of great help in resolving Greece’s problems.”

The spokesman said Germany had also paid out some €16.3 billion ($22.2 billion) to Greece in the form of bilateral and European Union assistance since 1960 to help the country’s European integration.

Germany, Europe’s largest economy, is seen as the key to any EU financial assistance package to help Greece out of its spiralling debt crisis.

Many German taxpayers, however, are angry at the prospect of having to assist more profligate European economies such as Greece.

Speaker of the Greek parliament, Philippos Petsalnikos, on Tuesday said he would invite the German ambassador to discuss media coverage he described as subjective, simplistic and at times inaccurate, the Ana news agency said.

Petsalnikos accused the Stern weekly of misleadingly summing up the crisis as Greece frittering away German taxpayers’ hard-earned euros and arguing that Germany was footing the bill for Athens’s irresponsibility.

However, the Greek newspaper Eleftheros Typos also did not pull punches on Wednesday, writing “finance Nazis are threatening Europe” and “the Germans have slandered our country enough.” The accompanying picture to the article adorned a famous statue in Berlin with a swastika.

Prime Minister Georges Papandreou hit out at foreign officials and media last month for descriptions of the Greek crisis that “bordered on racism,” but has not raised the issue since.

Greece’s government overspending reached 12.7 percent of output in 2009 as the global downturn sent public deficits through the roof, putting government bonds under pressure, weakening the euro and pushing the eurozone into crisis.

Under acute pressure from its 15 eurozone partners, the Greek government has pledged to slash its deficit to 8.7 percent this year, agreeing to painful public spending cuts that sparked a general strike on Wednesday.

The EU has pledged support for Greece but has also ordered strict monitoring for its deficit-cutting program, and Tuesday sent a team to Athens on the first of a string of visits to make sure it is on the right track.