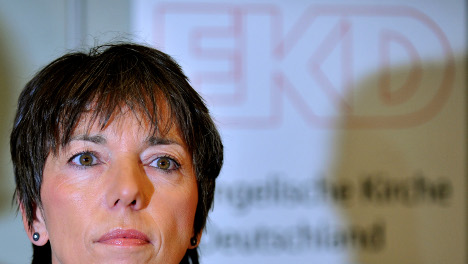 Käßmann said she no longer had the moral authority to comment on issues such as the war in Afghanistan, which she has sharply criticised.

“On Saturday I made a serious mistake that I deeply regret,” she said at press conference in Hannover. “But I cannot overlook that fact that my office has been damaged and my heart tells me very clearly I can’t stay in office with the necessary authority.”

Käßmann said she would step down from all positions effective immediately aside from her job as pastor of a congregation in Hannover.

Her decision to resign came only hours after Protestant church council leaders publicly gave their support to Käßmann.

The 14 members of the Evangelische Kirche Deutschland (EKD) council backed the bishop during a teleconference on Tuesday evening, they said.

Käßmann has their “undivided confidence” to make a “decision over the path that will then be pursued together,” the council said.

She was pulled over on Saturday evening after running a red light in the Hannover city centre. She was found to have a blood alcohol content of 1.54 per mill, public prosecutor Jürgen Lendeckel confirmed on Tuesday.

The bishop, who was driving a church vehicle, apparently smelled of alcohol, and police asked her to undergo a breathalyser test. Well over the legal limit, Käßmann was taken to a nearby police station for a blood test.

“I’m shocked at myself,” Käßmann told Bild. “I am aware of how dangerous and irresponsible drunk driving is. I will, of course, confront the legal consequences.”

A church spokesperson told news magazine Der Spiegel that Käßmann’s blood alcohol content was 1.1 per mill, not 1.3 per mill as initially reported by Bild. The former is at the threshold of the legal limit, while the amount of 1.54 per mill as confirmed by the state prosecutor constitutes being “absolutely unfit to drive” according to German law.

Meanwhile Hannover police told the magazine that they had taken Käßmann’s driver’s license and begun an investigation into the matter.

Margot Käßmann became the first woman to lead the 25 million members of Germany’s Protestant churches in October 2009 after the majority of the synod voted in her favour.

Käßmann has proposed a radical course of reform for the EKD, which suffers from shrinking congregations and revenues. In addition to streamlining the clergy, she plans to increase the church’s profile and improve strained relations with Catholics.

Since taking her leadership post she has called for Germany to withdraw its troops in Afghanistan, calling the military action there “unjustified.”