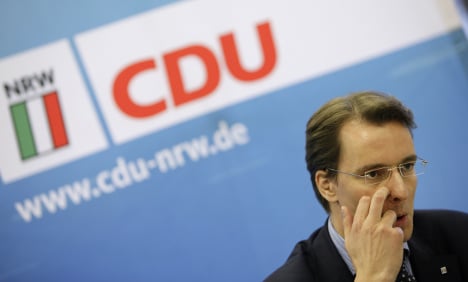 The scandal erupted over the weekend when news magazine Der Spiegel reported that it had letters from the CDU detailing an offer for companies to rent exhibition space and pay an additional €6,000 for a personal discussion with Rüttgers at last year’s March 20 party convention.

Rüttgers denied knowing about the arrangements and promised to have them stopped immediately.

On Monday, 34-year-old Wüst took responsibility for the affair, resigning after talks with Rüttgers, who thanked him for his service. Wüst, who has been the conservatives’ general secretary in North Rhine-Westphalia since 2006, will continue to work within the party’s state parliamentary group.

Meanwhile Rüttgers rejected accusations that his conservatives are venal, calling the criticism “absurd and totally unfounded.”

Rüttgers faces re-election on May 9 in a vote that could affect the balance of power in Germany upper house of parliament, the Bundesrat. Should the CDU lose in North Rhine-Westphalia, Chancellor Angela Merkel’s centre-right coalition would no longer have a majority in the chamber that represents Germany 16 federal states.