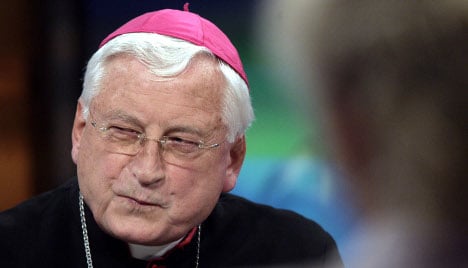 The daily Süddeutsche Zeitung reported Mixa’s remarks had caused a rift within his diocese, with one church official saying they were “depressingly imprudent” and the situation was “increasingly embarrassing” having to explain the bishop’s latest “blunder.”

“The leadership hasn’t realised how this looks to the congregation,” said an unidentified member of the Augsburg diocese council.

No stranger to controversy, Mixa sparked outrage this week for saying the systematic sexual abuse recently uncovered at several Catholic schools could be traced to the promotion of more liberal attitudes towards sex.

“The so-called sexual revolution, in which some especially progressive moral critics supported the legalisation of sexual contact between adults and children, is certainly not innocent,” he told the Augsburger Allgemeine Zeitung.

The Catholic theologian Uta Rank-Heinemann told the website of news magazine Focus on Thursday that Mixa was essentially trying to shirk the blame for the horrible sexual abuse.

“The important thing is that someone else is responsible,” she said.

The abuse scandal that was uncovered at Berlin’s prestigious Canisius school last month continues to grow, with around 50 former students claiming they were sexually abused in the 1970s and 1980s.

But lawyers for victims have said more than 115 people across the country have since come forward with allegations of abuse by up to 12 different priests and teachers at other Catholic institutions too.