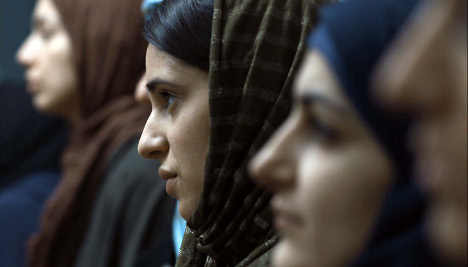 “Shahada” (Faith), the film school graduation project of 29-year-old Burhan Qurbani, is competing against 19 features by the likes of Roman Polanski and Chinese veteran Zhang Yimou for the Berlinale’s “Golden Bear” prize.

The picture zeroes in on three young Muslims in Berlin struggling with an unexpected pregnancy, gay love and a freak accident that cause each of them to question the Islamic values imparted by their families. It picks up recurrent themes in several entries at the 60th Berlinale, where drama, comedies and thrillers are reconciling modern life in the West with the Muslim faith.

“Terrorism, honour killings, fundamentalism and female oppression. The themes of films in the Berlin festival lineup this year could read like a series of banner headlines from Fox News,” the Hollywood Reporter wrote, referring to the right-wing US news channel. “But instead of sensationalism and stereotypes, what the films… offer are new images of Islam.”

Qurbani said he had aimed to demonstrate that people who are fully engaged in modern society can also observe their faith, and question it.

“I’m a Muslim but Muslim 2.0 – an upgrade,” he told a news conference after a press preview. “You are Muslim even if you don’t do everything that is in the Koran. The

faith is too big to be diminished by that.”

He bristled when a German reporter questioned the plausibility of one of his characters, a moderate, tolerant imam who forgives his daughter for her abortion when she nearly dies due to complications.

“I don’t know how many imams you spoke to recently but they are not all hate preachers – 99 percent of them are not hate preachers,” he said.

But he acknowledged: “I created this imam as my ideal – I also haven’t met one like him.”

Also in Berlin, Bollywood superstar Shah Rukh Khan presented his new movie “My Name is Khan” about discrimination faced by Muslims in the United States in the wake of the September 11, 2001 attacks.

The nearly three-hour-long epic – a lightning rod for Hindu-Islamic tension in India after Khan criticised the lack of Pakistani cricketers in the Indian Premier League – sees Khan preaching against hatred on an American road trip.

The Times of India said it sent a message “that tolerance is the indispensable virtue for the 21st century which can have no place for (fundamentalists), regionalists, communalists, casteists, gender, class and cultural chauvinists.”

A more modest picture, “When We Leave” in the Panorama sidebar section of the festival, tackles honour killings, focusing on a German-Turkish woman whose father condemns her to die after she leaves her abusive husband.

The film resonated in particular with Berlin audiences as it stars Sibel Kekilli, who dazzled audiences in the breakout film by German-Turkish director Fatih Akin “Head-On,” which won the Golden Bear in 2004.

Immediately after that film’s triumph, the German tabloid press revealed Kekilli had appeared in a few adult movies, leading her conservative Muslim family to disown her.

Still to come in competition this week is “On the Path” by another former Golden Bear winner, Jasmila Zbanic of Bosnia.

In it, a husband finds work in a community of conservative Wahhabi Muslims and begins to adopt its practices but he drives a wedge through his marriage in the process.

The Berlinale jury will award the top prizes Saturday before the festival wraps up the following day.