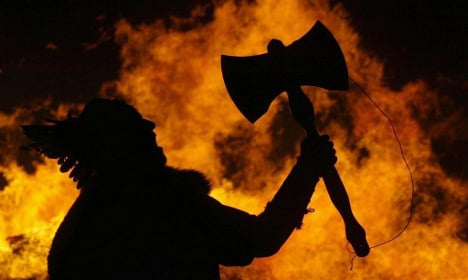 As festivities for the Karneval holiday of Rosenmontag were underway in the small community of Kleinrinderfeld on Monday evening, about 20 costumed Vikings battered down an apartment door and descended upon the family inside, Würzburg county police spokesman Karl-Heinz Schmitt said.

The four people – a mother, her two sons and daughter – were reportedly not its regular residents, but rather simply staying at a friend’s home when the attack occurred.

“We can’t say exactly what happened in this apartment, but there is evidence that the family was attacked with real violence,” Schmitt said. “They were all injured, but in the hospital these wounds were luckily found to be much less severe than first thought – just cuts and bruises.”

The Vikings, who had reduced the apartment door to splinters, vanished after the attack, leaving only a broken wooden sword behind. Though police have questioned numerous revellers out celebrating that night, their efforts were thwarted because the local parade theme was “Vikings,” which meant there were hundreds of people dressed as rampaging Norse warriors in the town.

While some reports have said the attack may have been an act of revenge in a personal dispute, Schmitt said police are still unsure what motivated the violence, which also included the theft of a computer and stereo.

If found, people involved in the attack could face charges of breaching the public peace and assault, police said, asking that anyone who saw suspicious activity around 7 pm on Monday file a report.

“We know for sure that there were a great many people dressed as Vikings at the festivities and our task now is to pluck those responsible for this crime from that group,” Schmitt said, adding that police have formed a six-person team to continue the investigation.

Rosenmontag is the traditional high point of Germany’s alcohol-fuelled Karneval festivities. On this day people dress up in costumes and stage elaborate parades to celebrate on crowded streets.