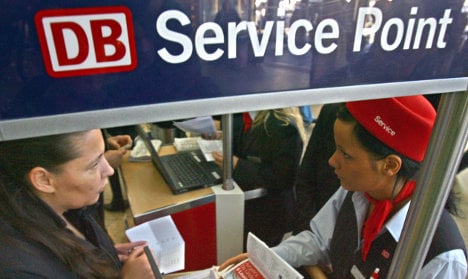 DB chief Rüdiger Grube has written to parliamentarian Ernst Hinsken of Bavaria’s conservative Christian Social Union (CSU) to assure him the company would be moving away from the use of English in its product descriptions, daily Süddeutsche Zeitung reported on Tuesday.

Hinsken had written to Grube raising his concern about the growing use of English terms and phrases.

In the letter, Grube said the company would no longer be using the term “flyer” to describe its leaflets. Nor would it call its customer service phone number a “hotline” and would be dropping or reviewing other English terms.

However, it would keep using product brand names such as its travel discount “BahnCard” and “InterCity” trains, which it believes people have got used to and would be cumbersome to change.

Some terms will be given German explanations – such as the “Call a Bike” service, which will soon be followed in promotional material by – “das Mietrad-Angebot der Deutschen Bahn” – or “Deutsche Bahn’s bike rental offering.”

The decision comes amid a broader shift in Germany about use of gratuitous and often silly English, with some senior politicians complaining that Anglicisms have started to ruin the German language.

Peter Ramsauer, also from the CSU, told the paper: “I know of no other country on Earth, in which people treat their own language with such a lack of respect.”

The DB complaints stemmed from former school principal Franz Aschenbrenner’s complaint to Hinsken, who was his local parliamentarian. According to Süddeutsche Zeitung, Aschenbrenner was annoyed by the “mindless practice of Anglicisms” – in particular when DB set up a “Kiss&Ride” zone (allowing car drivers to drop off or pick up train passengers without having to park) at Straubing station in Bavaria.

“What right does Deutsche Bahn have to impose on us a language that isn’t ours?” he asked.

Hinsken passed on the complaint to Grube – partly, it seems to head off any confusion about a recent local newspaper headline, “Hinsken for Kiss&Ride.” Readers with weak English might have thought Hinsken was calling for the establishment of a drive-by red light district.

And so Hinsken asked the company whether they couldn’t come up with a German title for the service. Grube responded immediately that he would have his people come up with an alternative to the Anglicism, to avoid further confusion.