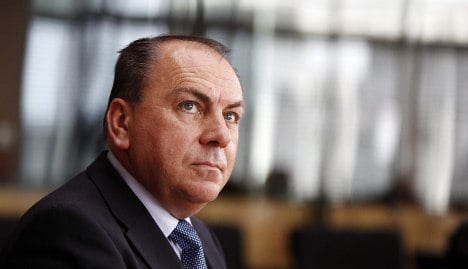 In talks still primarily focused on the Greek debt crisis, finance ministers from the euro area must also choose between Portugal’s Vitor Constancio and Luxembourg’s Yves Mersch to replace Lucas Papademos when he steps down in May.

Although ECB President Jean-Claude Trichet’s term runs until October 2011, nominations for the top job and the deputy are closely linked. Chancellor Angela Merkel’s government has officially termed the debate “premature.”

Press speculation, however, say that Berlin has pressed hard for Constancio, currently the Portuguese central bank governor, to be named vice president, with the goal of getting the top spot for Weber.

Countries that lie along the Mediterranean basin also have a candidate for ECB president in the person of Italian central bank president Mario Draghi, according to an Italian finance ministry document leaked to the press.

The choice of vice president thus gives a good idea of who will be the front runner for the top job.

The German newspaper Süddeutsche Zeitung said in an editorial: “These political manoeuvres should not come at the detriment of Europe. Weber is an excellent economist, a recognised central banker who has also shown he can resist political pressure.”

But the daily acknowledged that Draghi has similar qualities.

Weber, who will turn 53 in March, has the solid backing of German politicians and economic experts, though he is not particularly well known by the public.

Placing him at the ECB’s helm would be a guarantee of the euro’s stability and a merciless fight against inflation, which for Germans is the absolute target since the country’s devastating financial crisis in 1923.

A well-dressed former economics professor, Weber’s manner is sometimes abrupt but he has won widespread respect for his rescue of the German financial sector since September 2008.

Being named head of the ECB would be a peak in a rapid career that saw the native of Kusel, western Germany, being named professor at the age of 37. At 45 he was already a member of the “Five Wise People,” a panel of government economic advisors.

Two years later he was named head of the Bundesbank as it faced a crisis brought on by the resignation of Ernst Welteke, who had accepted a luxury stay in Berlin paid for by Dresdner Bank.

Tasked with restoring the central bank’s reputation, Weber gave himself another job as well, watching over the banking sector.

To do that, he brought in a close circle of aides, a move that irritated long-time central bank employees, who form a tight group of their own.

A string of regional Bundesbank offices were then restructured or closed, leading to the central bank’s first demonstration by Frankfurt staff in October.