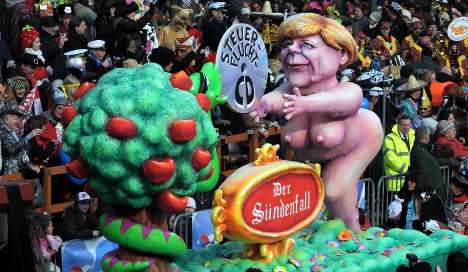 More than a million people braved the snow in Cologne to line the route of the seven-kilometre Rosenmontag parade, where revellers traditionally poke fun at current events and enjoy tonnes of sweets hurled from the travelling floats.

Another float at Düsseldorf’s parade showed Chancellor Merkel completely in buff chasing a CD with information on German tax dodgers.

Click here for a photo gallery of the Rosenmontag parades.

Obama’s controversial Nobel Prize was also the butt of the joke on one stand, which featured a huge Uncle Sam receiving the prize while the Statue of Liberty applied her torch to the effigy’s behind.

The economic crisis was never far from the action, with several floats depicting Greece’s debt woes and the crisis afflicting the German automotive industry, with carmaker Opel portrayed as a martyr.

One float showed effigies of bankers dolled up as Michael Jackson’s famous zombies from the hit video “Thriller,” as the banking world rises slowly again from the dead.

The German carnival season kicked off November 11 and culminates this week with the observance of Ash Wednesday.

For the first time, much to the annoyance of local brewers, authorities have banned the sale of bottled beer during the carnival, following a string of injuries from flying glass when the revelry got out of hand.

“In recent years, we have seen more and more injuries from shards of glass, either due to accidents or fights,” a spokesman for the town hall said.