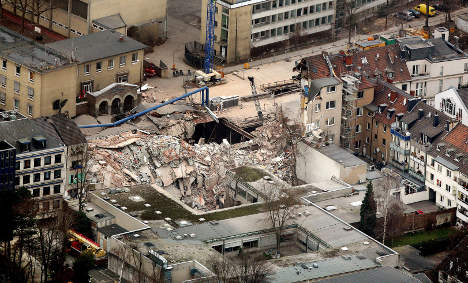 An additional 28 falsified records for underground metro construction at various sites across the city have been discovered, an investigation insider told daily Kölner Stadt-Anzeiger.

“We assume that it could be significantly more,” the source said. “For us it looks like systematic falsification.”

Over the weekend the paper reported fresh claims that shoddy work practices caused the collapse of the archive building, including a report that construction firms were skimping on concrete.

Cologne city authorities were forced to repeat assurances there was no danger of further collapses as tens of thousands of Karneval revellers gather in the city this weekend.

City director Guido Kahlen said the big days of celebration on Sunday and Monday could “without doubt” go ahead.

But the Kölner Stadt-Anzeiger cited experts who did not rule out that the underground excavations could become unstable if the Rhine River level rose to more than four metres because of heavy snowmelt.

The paper reported that too little concrete may have been used on the tunnel under the Waidmarkt area – a possible reason for collapse of the tunnel that led to the destruction of the city’s historical archive in March 2009 and two neighbouring buildings, killing two people and destroying countless historical documents.

On Thursday examinations had shown that at the site of the Heumarkt U-Bahn only 17 percent of the plates meant for the supporting wall had been used. These plates were needed to stabilise the structure, the paper reported.

According to the paper, assessors from the state prosecutor’s office believe a leak into the fitted plate 11, directly beneath the archives building, flowed from groundwater in an excavation pit.

The breach could have arisen because the 3.4 metre wide shovel for digging the plate to a depth of 30 metres was damaged on an obstruction, meaning a 2.8 metre wide digging tool was substituted.

The report said a further 22 plates were installed based on incorrect surveying procedures.