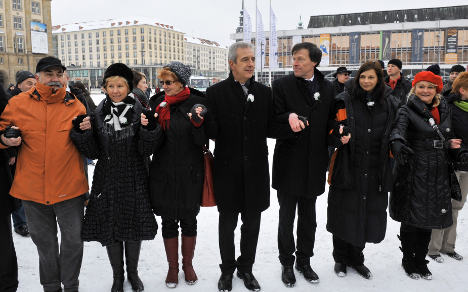 And among the estimated 15,000 anti-Nazi protesters, many banded together to force the 6,400 neo-Nazis who gathered at Neustadt train station to abandon their plans to hold a ”funereal march” through the city.

“We have for the first time succeeded in preventing the biggest neo-Nazi march in Europe,” said Lena Roth of the “Dresden without Nazis” alliance of politicians, artists and unionists.

Police, who deployed nearly 5,700 men, said late Saturday that clashes broke out on several occasions resulting in “at least 27 injured, including 15 policemen” as stones and bottles were thrown.

But they said the neo-Nazis were not able to stage the march as their opponents blocked highways, crossroads and railway lines.

About 30 people were arrested during the day from the two camps, police

A brawl erupted at a road stop near the Saxon town of Plauen between about 150 left-wing and 50 right-wing extremists, all of whom were on their way to respective demonstrations. Three neo-Nazis – one aged 16, the others both 24 – were injured in the brawl, a police spokesman said.

Police also had to deploy water cannon after they were attacked, a spokesman said, though he was unable to give details.

Neo-Nazis have for years marked the bombing of Dresden to show that Germans were the victims as well as the instigators of brutality during World War II. The 1945 bombing, which killed 25,000 people and destroyed most of the city, is widely considered to have been militarily unnecessary.

On Saturday, the left-wing demonstrators had blocked streets, including the road between the main train station and the Neustädter station.

Dresden Mayor Helma Orosz, who organised the human chain, told the crowd: “We stand against the attempt by old and young Nazis, to abuse this day of mourning.”

The memorial day was for Dresden traditionally a “quiet day of mourning,” she said. But it had to be remembered, she said, “who had started that accursed war.”

By forming the human chain, the city had “become a fortress against intolerance and stupidity,” she said.

Saxony Premier Stanislaw Tillich also took part in the chain. As the two ends linked to form a ring, the bells of the old city’s churches rang.

About 200 people – among them neo-Nazis including representatives of the far-right National Democratic Party – gathered in the Heidefriedhof cemetery to lay wreaths.