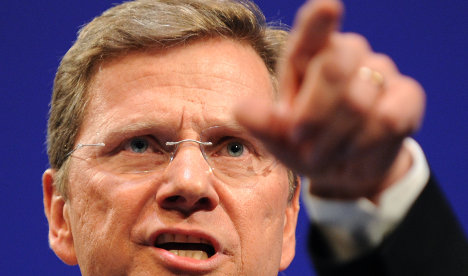 “Those who walk all over the willingness of citizens to achieve something should apologise,” he told daily Passauer Neue Presse. “Those who work should have more than those not working. One must be allowed to say that. Anything else is socialist.”

Westerwelle, who is also vice chancellor and leader of the pro-business Free Democrats (FDP), sparked widespread outrage for claiming his countrymen were heading towards “late-Roman decadence” by supporting increasing Hartz IV welfare benefits instead of the tax cuts he favours in an editorial published on Thursday.

“There’s a Pavlovian call that suddenly there can be no more relief for citizens because the money is need for higher Hartz IV payments,” Westerwelle wrote in a contribution for daily newspaper Die Welt. “Those that pay for everything are hardly acknowledged anymore.”

Earlier this week, Germany’s Constitutional Court kicked off a national debate about welfare by ruling that the amount of unemployment benefits under Hartz IV was not transparent in the way it was calculated and not gauged according to real-life circumstances.

In particular, the method of calculating children’s payments as a percentage of benefits given to adults was unconstitutional. The court ruled benefits should instead be calculated to ensure welfare recipients could at least live according to minimum humane standards.

Members of the opposition have accused Westerwelle of wanting to betray Germany’s cherished welfare state and trying to drum up support for his beleaguered FDP by attacking those on the dole.

“The vice chancellor and foreign minister doesn’t understand the basic principles of our welfare state and he apparently doesn’t care about them either,” said Cem Özdemir, head of the opposition Greens party.

But even Chancellor Angela Merkel distanced herself from Westerwelle on Friday.