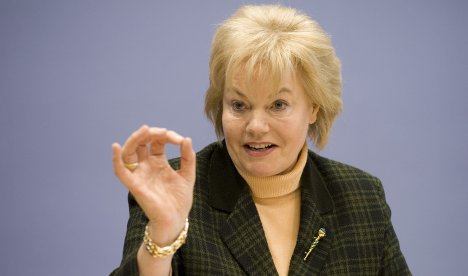 The Federation of Expellees (BdV) head Erika Steinbach said she had agreed with the government not to seek nomination to the board organising the planned documentation and exhibition centre in Berlin.

Steinbach, an MP from Chancellor Angela Merkel’s conservative Christian Democrats (CDU), is something of a hate figure in neighbouring Poland for refusing to accept the German-Polish border after German reunification in 1990, and the prospect of her nomination had sparked unease over the border.

Her participation was also opposed by German Foreign Minister Guido Westerwelle, whose Free Democrats (FDP) party is the junior coalition partner in Merkel’s government. The Bavarian sister party of the CDU, the CSU, supported Steinbach.

In return, however, the number of seats held by the BdV on an expanded board organising the museum will be doubled to six, Steinbach told reporters in Berlin. Future nominations will be made by parliament, and not by the government as at present, Steinbach added.

“We are convinced that we have found a good solution,” she said.

The decision to create the museum by Merkel’s government followed decades of agonised debate over how to remember the 15 million ethnic Germans forced to flee to Germany from areas now in countries including Poland, the Czech Republic, Slovakia and Hungary which were occupied during World War II.

Many of these ethnic Germans had roots in central and eastern Europe going back centuries, and tens of thousands died as they fled in 1945.

The centre aims to focus on expulsion in general – not just the expulsion of Germans – in order counter accusations that it had put Germans’ suffering on a par with that of victims of the Nazis.