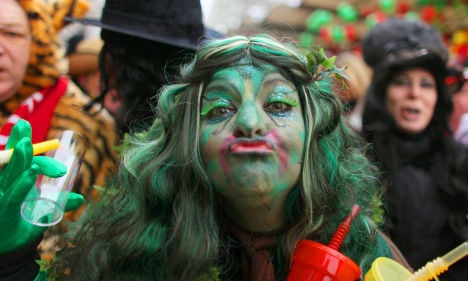 Festivities for the “fifth season,” as Karneval is known, kicked off in Cologne, Düsseldorf, Koblenz and Mainz at exactly 11:11 am, where costumed women stormed city halls in a mock performance of taking over the government.

The day is traditionally characterised by the Weiberfastnacht, which could be translated as “Wenches’ Carnival,” when women run around snipping off the ties of men dumb enough to wear them. The men are then compensated for losing this symbol of their manhood with a kiss.

But Jecken, or jesters, looking forward to festivals and parades this year have been warned of bitter cold and icy streets as winter weather continues to batter Germany.

Click here for a photo gallery of the Jecken in past years.

Cold air blowing in from the north will keep temperatures in the Rhineland below freezing, reaching as low as the negative teens at night, the German Weather Service (DWD) reported on Thursday.

According to Susanne Stangl, owner of a large Karneval costume store near Koblenz, the cold has spurred a rush on plush, full-coverage costumes.

“Everything that has a thick plush suit is in demand – lions, monkeys and rabbits,” she said, adding that she’d sold several thousand adult sizes and her children’s lion costumes were sold out.

Luckily for smokers celebrating in cosy and warm pubs, the North Rhine-Westphalian Health Ministry announced Thursday that it had temporarily lifted the state smoking ban. Owners and staff at bars and restaurants will be allowed to decide whether customers may smoke, a spokesperson said, emphasising that the suspended ban was an exception.