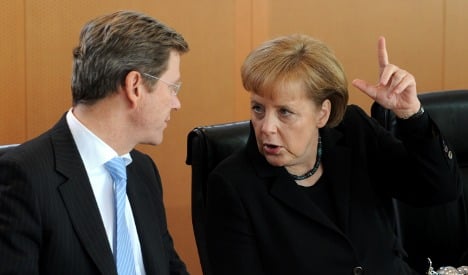 Approval of their pro-business coalition partners, the Free Democrats (FDP), dropped 1 percentage point to 8 percent, according to the poll, published in Stern magazine and broadcast on RTL television.

That would put the ruling coalition on 42 percent, some 8 points behind a potential coalition of the centre-left Social Democrats (SPD), the environmentalist Greens and socialist Left party.

This was the so-called ”black-yellow” partnership’s worst combined result since the autumn of 2001, after the September 11 attacks on the United States boosted the poll numbers of the then governing coalition of the SPD and Greens.

The SPD, who are themselves struggling after their drubbing in the federal election last September, were unchanged on 22 percent, while the Greens gained a point to reach 17 percent – giving them a new poll high since the last election. The Left party was stable on 11 percent.

The ruling coalition has faced widespread criticism for months because of infighting between the coalition partners over a range of issues and Merkel’s own perceived aloofness.

On Sunday evening, the FDP announced it would try to step up the pace of reform in response to consistently bad poll numbers. It has clashed with members of Merkel’s conservatives over everything from tax cuts to Afghanistan to nuclear power.

However, pollster Manfred Güllner said the relatively rapid dip in the government’s ratings probably came from unease over its decision to buy the stolen data on Swiss bank customers suspected of dodging taxes in Germany.