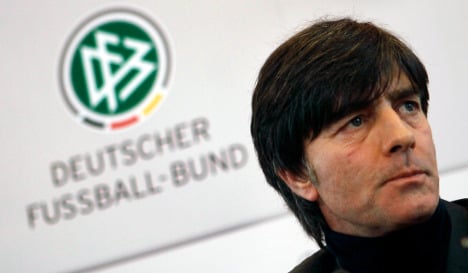 “We have agreed upon a clear strategy right up to the World Cup,” Löw said during a televised press conference from the DFB’s base in Frankfurt.

“We agree that our mutual interest is tied to the build-up to the World Cup over the coming weeks and months and we will prepare the team so that it can enjoy a good tournament.”

Löw confirmed, however, that an extension to his contract, which expires in July this year, will not be discussed until after the World Cup (June 11-July 11).

“We have a very high responsibility, and not just vis-a-vis the DFB for this World Cup, but because we are representing Germany in a competition overseas,” he said. “And behind us there are millions of supporters who want and who of course expect the team to play a good tournament.”

DFB president Theo Zwanziger also confirmed that no contract negotiations would take place before the World Cup, but reiterated his faith in Löw.

“The team needs this coach,” Zwanziger said. “We want success and I say it here and now, such success at the World Cup is only possible with this coach.”

The DFB suspended negotiations over a two-year extension to Löw’s contract, citing wage demands made by Löw and the team’s general manager, Oliver Bierhoff.

Löw had been expected to agree to stay on until the 2012 European Championship and on Sunday he declared himself “very angry” with the DFB’s decision to publicise details of their negotiations.

Bayern Munich president Karl-Heinz Rummenigge had earlier urged the DFB to find a solution with Löw.

The Bayern chief also criticised Bierhoff for having reportedly demanded the right to veto the appointment of Löw’s successor.

“That was not acceptable (but) I think he’s prepared to take a step back,” said Rummenigge, who added that the DFB had made a “serious mistake – the

biggest mistake possible – by publicising the contents of the contract.”

Löw took over as Germany’s national coach in 2006 after two years as an assistant to Jürgen Klinsmann.

At this summer’s World Cup, Germany have been drawn in Group D with Australia, Ghana and Serbia.

They will enter the competition as one of the favourites, but Löw must resolve problems that include the lack of an obvious first-choice goalkeeper and the poor form of strikers Miroslav Klose and Lukas Podolski.