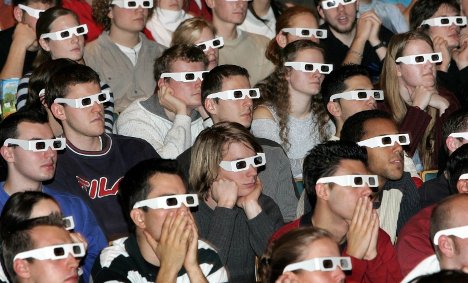 The head of the festival’s nine-day European Film Market, Beki Probst, said the event would move to harness the new demand by offering for the first time digital 3-D screenings to industry honchos.

“We have rented a movie theatre that is not on Potsdamer Platz (the festival venue) but on the Kurfürstendamm boulevard – a prestigious cinema that is well-known and equipped for a true 3-D experience, complete with the glasses,” Probst told AFP ahead of the start of the festival on Thursday.

Probst has presided over a major of expansion of the European Film Market since 1988, which has become a key event for the buying and selling of international rights to new releases.

Industry insiders say the success of rights-trading in Berlin helped propel the festival to become the clear number two in Europe behind Cannes, well ahead of Venice which has no market.

Film is one of the few sectors that did not see sales plummet in the global recession, and blockbusters such as James Cameron’s science fiction 3-D opus “Avatar” have provided another strong shot in the arm.

While the depth-perception technology has been around for years, the technological leaps behind the success of “Avatar” and the animated “Ice Age 3,” which was released in 2-D and 3-D, have propelled it into a new orbit.

The Oscar-nominated “Avatar” – believed to be the most expensive motion picture made – has now grossed more than two billion dollars worldwide.

And it has convinced global audiences that the latest three-dimensional technology can transform the viewing experience.

Cinemas worldwide are re-equipping for new 3-D releases from major US studios such as Dreamworks and Pixar including the hotly anticipated “Alice in Wonderland” by Tim Burton, due out in March.

For its part, the European Film Market in Berlin will spotlight between 10 and 12 new 3-D productions this year, Probst said.

While she acknowledges that 3-D has sent a jolt of excitement through the industry, Probst is leery of huge Hollywood movies squeezing out the kind of independent productions for which Berlin is most famous.

“There is a kind of cannibalisation by the big productions,” with box office champs punting little movies out of cinemas, said Probst, who owns movie theatres in Switzerland. “While it’s right to say ‘cinema is doing well’ you have to ask who is doing well. How many ‘Avatars’ or ‘Ice Ages’ can you have in a year?”

She added that production money was noticeably drying up, leading to fewer international releases.

“But that’s not a bad thing because in recent years, too many films were produced. There was inflation, due in part to all the public subsidies,” she said. “Certain films should never have been produced. There are films that never found an audience.”

The European Film Market itself is in rude health, she said, with 410 firms signed up to attend, compared to 408 last year, and 127 new names coming mainly from the United States, Britain, Germany and France, many of them Internet start-ups.

But she said the wheeling-and-dealing of past years had grown a bit more sober in the economic crisis.

“The days where contracts were signed on the corner of the restaurant table are over,” Probst said. “Now people no longer buy with their eyes closed, they haggle over the price.”