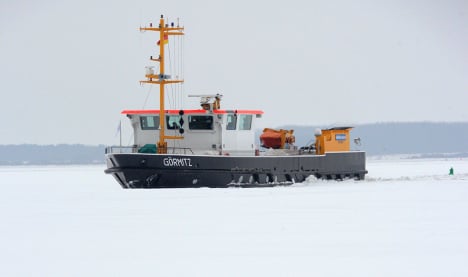 The ship “Görmitz” broke through the ice to deliver 15 tonnes of food and essentials to people living on the small, car-free island, news agency DDP reported. Another 12 tonnes had already been brought on Sunday. According to captain Horst Behrens, the ship will take time off from its duties escorting freighters through ports in the state of Mecklenburg Western-Pomerania to deliver more goods to the island each Friday as needed.

Click here for photos of winter’s icy grip on Germany.

Hiddensee’s supply drama began 11 days ago when the region’s regular ice breaker, the “Vitte,” broke down. Helicopters were initially forced to come to the rescue for the island’s some 1,000 residents until a replacement boat could be found.

Another consequence of the thickening ice crust after five weeks of snow across the country has been numerous injuries, a hospital survey by news agency DPA showed on Monday. Many reported an increase in broken bones blamed on poorly cleared streets, and some hospitals had so many cases they said they’d stopped counting.

Some 80 percent of the patients at the Klinikum Magdeburg emergency rooms are classified as “winter victims,” spokesperson Heike Gabriel told DPA, adding that surgeons and orthopaedic specialists have been overwhelmed.

Kiel and Lübeck outpatient clinics for the University Medical Centre in Schleswig-Holstein have seen an increase of 50 to 70 percent for broken bones, spokesperson Oliver Grieve said.

Meanwhile the Charité hospital in the capital city of Berlin, where sidewalks are particularly icy, has ceased to keep count of its winter injury cases.

Light snow is likely in northeastern and southwestern German on Tuesday, but the white stuff will cover the nation by Wednesday with up to 10 centimetres of accumulation in mountainous regions.

More snow in the north will continue on Thursday and Friday.

“The winter isn’t going to be over for a while,” DWD meteorologist Dorothea Paetzold said, adding that there was no sign conditions would improve in the near future.