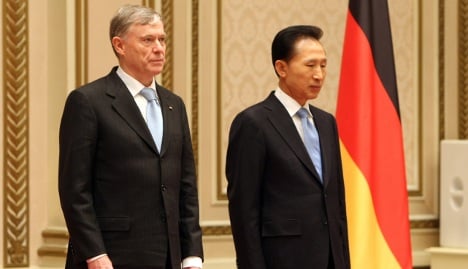 President Lee Myung-Bak and his counterpart Horst Kohler also had “in-depth” talks on this year’s G20 summit to be hosted by Seoul in November, and a free trade agreement between South Korea and the European Union, Lee’s office said.

Lee thanked Germany for backing his country’s efforts to sign the FTA and sought continued cooperation for early ratification of an initial pact agreed last October.

Germany – which marks the 20th anniversary of its reunification this year – has valuable experience that it can share with divided Korea, officials said.

“With South and North Korea divided, in particular, Germany’s reunification process is thought to be helpful to South Korea,” he told Yonhap news agency.

Reunification is the stated goal of both communist North Korea and capitalist South Korea. But analysts say the process would be far more complex than in Germany’s case, partly because of the huge wealth gap.

The North’s GDP was estimated at around $26 billion in 2008 compared to $1.3 trillion dollars for the South, according to the US State Department.