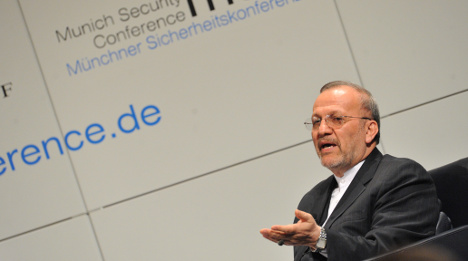 “With regard to discussions with the different parties, I personally believe that we have created conducive ground for such an exchange in the not very distant future,” Mottaki told a late-night session at the conference.

“Under the present conditions that we have reached, I think that we are approaching a final agreement that can be accepted by all parties.”

Under the plan, Iran would send some of its low-grade uranium abroad for enrichment and use it for peaceful purposes such as medical research – a move that would help soothe suspicions in the West, including in Germany, that Iran wants to arm itself with nuclear weapons.

Iranian President Mahmoud Ahmadinejad this week raised hopes of progress in the stand-off by saying a deal was possible, and Mottaki’s surprise appearance in Munich bolstered the impression that a deal was imminent.

That said, some Western observers fear that the comments constitute a stalling tactic to head off a fourth round of United Nations sanctions against Iran over its nuclear programme.

German Foreign Minister Guido Westerwelle reacted cautiously to the Iranian position, pointedly urging Tehran to abandon any nuclear weapons program and adding: “Our hand remains extended, but so far it is clutching at air.”

Others were more sceptical still. Philipp Mißfelder, foreign affairs spokesman for the conservative Christian Democrats’ parliamentary group, branded the remarks “fresh proof that Iran is trying to give the rest of the world the runaround.”

“The West’s offers of dialogue are consistently ignored,” he said.

Germany, the United States, Britain and France favour tougher sanctions, though China is resisting such a move, saying instead it wants to continue trying to find diplomatic solutions.

China has used the conference to continue building its status as the new global power, with Foreign Minister Yang Jiechi a key participant for the first time.

Yang said that China was sticking to its position that a “mutually acceptable” solution to the Iran spat could “somehow” be found.

“This issue has entered a crucial stage. The parties concerned should, with their overall long-term interests in mind, step up diplomatic efforts, stay patient and adopt a more flexible, pragmatic and proactive policy,” he said.

In an interview with daily Süddeutsche Zeitung, Mottaki struck a conciliatory note when asked whether Iran would toughen its stance if the UN security council went ahead with a new sanctions resolution.

“Of course, a move in the direction of a new resolution involves a political confrontation. We believe that both sides actually need the process of the swap, in order to find a way out of the present situation. Therefore we can assume that we can resolve this hitch with a bit of effort.

“And because of this, we hope that we will all interact and co-operate as long as it is possible to do so, rather than moving in the direction of confrontation.

”It’s always the case that whenever something happens, diplomats give their opinions, but we’re not in a hurry to make rash judgements before something happens. We don’t want to meet trouble halfway. We’re talking right now about the current situation and, at the moment, we see the atmosphere as positive.”

The influential Munich conference is dubbed the “Davos of security policy” after the World Economic Forum held last month at the Swiss ski resort. The forum brings together some 300 top military, diplomatic and political figures, traditionally from members of the NATO military alliance but increasingly from further afield.

Mottaki met on Saturday on the sidelines of the conference with Internation Atomic Energy Agency chief Yukiya Amano to discuss the uranium swap. Mottaki said the discussion had been ”very good” though Amano said Iran had offered no new proposals during the conversation.