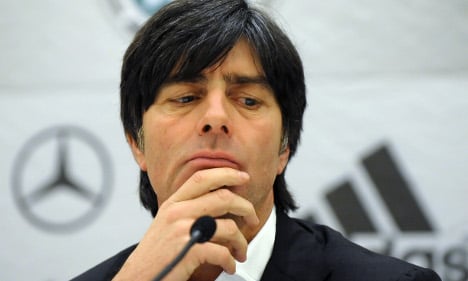 The news is a surprise as both the 50-year-old Löw and DFB president Theo Zwanziger had previously said the contract, which expires after the World Cup, was almost certain to be extended in the early months of 2010.

“Fundamentally both sides want to continue working together, but over a few aspects we could not agree,” said Zwanziger in a statement.

It had looked as though Löw would take Germany into September’s Euro 2012 qualification matches, with the draw set to be held in Warsaw on Sunday, but the stalled talks means his role is no longer guaranteed.

Germany team manager Oliver Bierhoff, who is part of the three-man coaching team renegotiating their contracts, admitted the news was a blow.

“We would have like to clear up the contract extension details quickly with the World Cup fast approaching, but we accept the president’s decision,” he said.

Löw succeeded Jürgen Klinsmann as Germany coach after the 2006 World Cup, when Germany finished third, and he steered his side to the Euro 2008 final where they lost to Spain.

Under his guidance, in 45 games Germany have recorded 31 victories, eight draws and six defeats.

At this summer’s World Cup, Germany have been drawn in Group D with Australia, Ghana and Serbia.