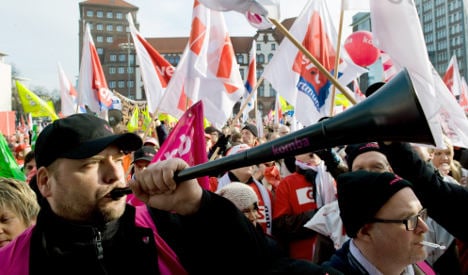 Frankfurt commuters had to find alternative ways to work as S-Bahn train and U-Bahn metro workers refused to keep public transportation running. Meanwhile 16 of the city’s 49 bus lines were also down due to the strike, which is set to last until midnight.

“The U-Bahn is the backbone of the city mass transit system – it’s going to make an impact,” said leader of the transportation network Traffiq, Klaus Linek.

In Saarbrücken some 500 trash collection service workers and street cleaners did not begin work in the morning.

“Our strike will be followed 100 percent,” spokesperson for public workers’ union Verdi Michael Blug said there.

The union, which aims to get its workers a five percent pay increase, said strikes would be concentrated in the states of Hesse, Saarland, Saxony-Anhalt and Saxony on Friday. In addition to mass transit services, city administration offices, child care centres, and vehicle registration centres will be affected.

On Thursday some 52,000 Verdi members took part in strikes to encourage their state and municipal employers to make a new contract offer. But the employers have said Verdi’s demands are too high coming after the horrendous recession last year.

The second round of negotiations broke down without an agreement in Potsdam on Monday.