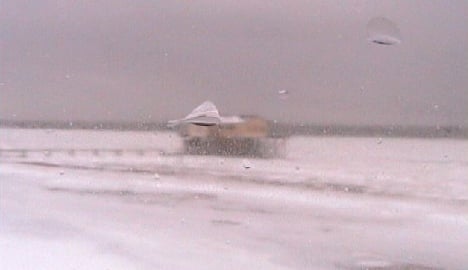 Photo: A screenshot of the St. Peter-Ording webcam.

The man, who has not been named and is in his forties, had ventured out on the frozen sea at St. Peter-Ording on the northern tip of Germany to take pictures of the sunset but became disorientated when darkness fell.

“He got lost on the ice and could not find the coast again because it was covered in snow,” Kristin Stielow, a spokeswoman for the local police, told news agency AFP.

The man began to flash his pocket torch in the hope of being rescued and the beams were picked up by a sharp-eyed woman in western Germany who had also been watching the sunset via a webcam installed on the beach.

She alerted the police, who were able to guide the hapless amateur photographer to safety.

“He escaped without injury but could well have died from cold or been injured on the ice or drowned when the tide came in,” Stielow said.