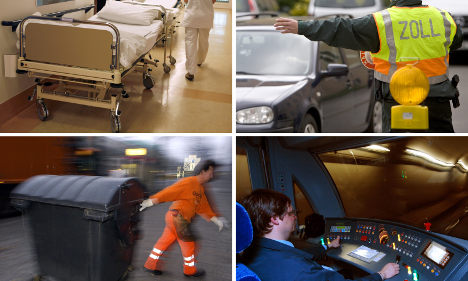 The action is part of a labour dispute with state employers and is meant to pressure them into giving workers a five percent wage increase.

At the Vivantes hospital in Berlin’s Neukölln district some 60 workers walked off their jobs, forcing the cancellation of scheduled surgeries. Emergency surgeries will still go ahead, Verdi said.

Workers at other clinics in Lower Saxony in Bremen planned to strike later in the day.

Waste disposal services in Nuremberg came to a stop too.

But Verdi said it would refrain from calling street maintenance workers to strike in cities still struggling to clear roadways after several snow storms.

The temporary strikes follow months of negotiations in which the workers have tried to gain better pay and new contract rules. On Monday a second round of talks between unions and employers in Potsdam collapsed.

Details of other affected cities was expected to be released throughout the course of the day.

A Verdi leader reportedly gathered some 50 union members outside a hospital in Frankfurt-Höchst, meanwhile another 2,500 were expected to meet before Frankfurt city hall by midday.

Because Germany is “in the middle of a crisis,” Bsirske told broadcaster ARD, the country should “counterbalance” the situation in order to overcome. He also complained that employers had yet to produce a concrete offer for a deal.

But president of the VKA association for municipal employers Thomas Böhle told radio broadcaster Deutschlandfunk it was unclear “what lies behind the unions’ five percent,” and called the warning strikes “totally inappropriate.”

He also called a five percent pay raise an “unrealistic number” because the financial situation of most communities is “really bad.”