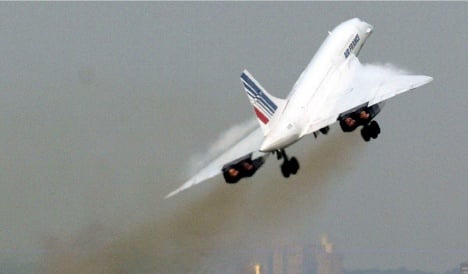 A file picture of the last commercial Concorde flight in 2003. Photo: DPA

US airline Continental has been accused of causing the crash, but the court will examine conflicting explanations of why the jet smashed into a hotel in a ball of fire just after taking off from Paris’ Charles de Gaulle Airport.

Continental and two of its employees will be in the dock in Pontoise, near the French capital, accused of the manslaughter of 109 people on board the New York-bound plane – most of them German tourists – and four hotel workers on the ground.

A former French civil aviation official and two former Concorde engineers will be tried on the same charge, with proceedings expected to last four months. The court will try to determine whether the crash on July 25, 2000 was caused by a strip of metal that fell on the runway from a Continental plane shortly before the Air France Concorde took off.

It will also ask whether the French official and the engineers failed to prevent the accident by correcting known faults on the iconic jet favoured by the rich and famous for their transatlantic trips.

Air France and British Airways grounded their Concordes for 15 months after the crash and, after a brief resumption, finally put an end to supersonic commercial service in 2003.

The Concorde made its maiden commercial flight in 1976. Only 20 were made, six for development and the remaining 14 for flying mainly transatlantic routes at speeds of up to 1,350 miles (2,170 kilometres) an hour.

Most of the families of the people who died in the 2000 crash agreed not to take legal action in exchange for undisclosed levels of compensation from Air France, EADS aerospace firm, Continental and Goodyear tyre maker.

So the trial will be more about Continental and Air France – which is not accused of wrongdoing and is a civil plaintiff in the case – seeking to defend their reputations and about the legacy of the Concorde.

A French accident inquiry concluded in December 2004 that the disaster was partly caused by a strip of metal that fell on the runway from a Continental DC-10 plane that took off just before the supersonic jet.

The Concorde, most of whose German passengers were due to board a Caribbean cruise ship in New York, ran over the super-hard titanium strip, it said. The strip then shredded one of its tyres, causing a blow-out and sending debris flying into an engine and a fuel tank and setting it on fire, the inquiry said.

Continental is charged over a failure to properly maintain its aircraft, along with two US employees: John Taylor, a mechanic who allegedly fitted the non-standard strip, and airline chief of maintenance Stanley Ford.

Henri Perrier was director of the first Concorde programme at Aerospatiale, now part of the EADS group, from 1978 to 1994, while Jacques Herubel was Concorde’s chief engineer from 1993 to 1995.

They are accused of ignoring warning signs from a string of incidents on Concorde planes, which during their 27 years of service suffered dozens of tyre blowouts or wheel damage that in several cases pierced the fuel tanks.

Finally Claude Frantzen, director of technical services at the French civil aviation authority DGAC from 1970 to 1994, is accused of overlooking a fault on Concorde’s distinctive delta-shaped wings, which held its fuel tanks.

Olivier Metzner, a lawyer for Continental, told AFP that he plans to argue that the fire on the Concorde was not caused by the strip.

“Several witnesses have said the fire on the Concorde began when the plane was 800 metres (2,600 feet) away from the part,” he said.

Roland Rappaport, a lawyer for the family of the Concorde pilot Christian Marty, said that “the accident should have been avoided.”

“Concorde’s weaknesses had been known about for more than 20 years,” he said.

A successful prosecution would result in a maximum fine of €375,000 for the airline and up to five years in jail and a fine of up to €75,000 for the individuals involved.