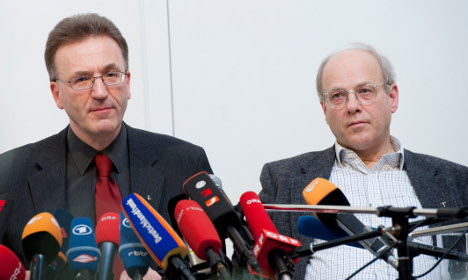 Dartmann (left) and Mertes (right) tell the press what they know. Photo: DPA

In addition to the 20 victims who have come forward at the Canisius College in Berlin, three from Hamburg and another two from the town of St. Blasien in the state of Baden-Württemberg have also said they were abused by the same two priests.

There are also indications from Church files that one of the perpetrators, identified as Wolfgang S., may have also sexually abused children in Chile and Spain up until 1990.

In a statement addressed to his victims over the weekend, the 65-year-old former sports teacher Wolfgang S., who left the order in 1992, said it was “a sad fact that I abused children and young people for years under pseudo-educational pretexts.” He said there was “no excuse.”

The confession follows revelations on Thursday that dozens of students had been abused in the top Berlin school in the 1970s and 1980s.

The school’s headmaster Father Klaus Mertes sent a letter to some 600 former students at Canisius College who may have been victims of at least two priests on staff. “With deep shock and shame, I have learned of these horrific, not only isolated, but systematic violations that went on for years,” wrote Mertes, before adding that both priests left the school in the 1980s.

Wolfgang S., who currently lives in South America, claimed that he had informed his Jesuit superiors of his dark past in 1991. Jesuit provincial leader Dartmann said over the weekend that the order did know of his crimes, and has hired a lawyer “to ascertain what the Jesuits specifically knew at the time, and what steps were taken.”

According to Dartmann, Wolfgang S. taught between 1975 and 1979 at the Canisius College before moving on to the Saint Ansgar School in Hamburg between 1979 and 1982. Then in 1982 he went the St. Blasien in the Black Forest and stayed until 1984 before moving on to Chile in 1985. He was also reportedly under psychiatric care while he served in Hamburg and St. Blasien.

The second suspect in the Canisius case, 69-year-old former religion teacher Peter R., taught religion at Canisius College between 1972 and 1981 in Berlin, before he moved on to Göttingen to work with youth between 1982 and 1989. He was suspended between 1989 and 1992, and then left the order in 1995. The church now has no contact with him, Dartmann said.

His files show several incidences of reported abuse beginning with an open letter in Canisius College in 1981 that criticised his sex education tactics, though there was no evidence of rape or sexual intercourse in his files, Dartmann said. There were no consequences from the letter, a fact that current Canisius College leader Mertes could not explain.

In 1982 Peter R. was injured in an apparent case of attempted murder, though it is unclear whether the event was related to abuse, Dartmann added.