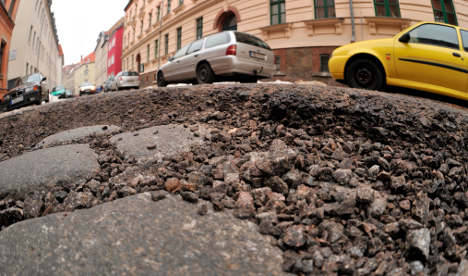 No money to fix the road in Leipzig. Photo: DPA

The problem began in earnest during 2009 and is expected to continue through the current year, city authorities told daily Süddeutsche Zeitung on Tuesday.

Communal deficits reached above €4 million in 2009, the paper reported ahead of a national meeting where the finances for 2010 will be discussed. Meanwhile in 2008 cities and municipalities were still in the black.

The main cause of the dire fiscal situation leading to a mountain of debt more than €11 billion was the dramatic reduction in tax revenues, the paper reported, adding that there were fears corporate taxes receipts could drop by more than 10 percent due to the bad economy.

At the same time, social security spending rose by more than €1 billion for cities, with local authorities doling out €40 million for Hartz IV welfare benefits alone.

German cities have already complained recently that they are bearing the brunt of recent tax cuts passed by Chancellor Angela Merkel’s government. The centre- right coalition pushed through a controversial stimulus package of €8.5 billion in tax relief from January 1, and plans much larger cuts in the coming years.