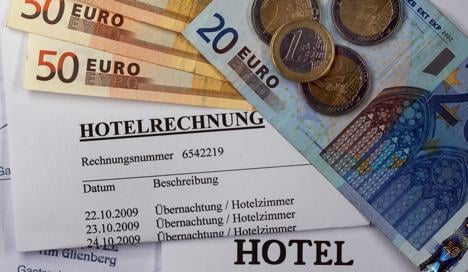 Andreas Pinkwart, deputy chairman of the Free Democratic Party, made the surprising U-turn in news magazine Der Spiegel on Saturday. “It’s good politics to make corrections when proposals fail the test of being put into practice,” he said, before adding that it would be better to introduce a general reduction in sales tax in the context of a reform of Germany’s entire tax system.

State premier of North Rhine-Westphalia Jürgen Rüttgers, of the Christian Democratic Union, expressed his support for the proposal by Pinkwart, who is also technology minister in Rüttgers’ state government.

The cut, from 19 percent to 7 percent, was made as part of a round of tax cuts that the CDU/FDP coalition implemented at the beginning of the year.

It subsequently caused the FDP considerable embarrassment when it was revealed that the party received huge donations from a major hotelier before last year’s election.

Rüttgers was enthusiastic about Pinkwart’s proposal: “It is good that Mr. Pinkwart called the reduction in sales tax for hotel stays a mistake,” he said, calling on the government to “seriously consider” Pinkwart’s suggestion.

But other FDP factions have distanced themselves from Pinkwart’s statement. Torsten Herbst, the FDP’s parliamentary leader in Saxony said that hotels in his state were under pressure from cheaper alternatives in eastern Europe, and that the reduction was right.

Herbst said that problems with putting the cut into practice should not be used as an excuse for simply abandoning it, adding that the reduction had been “promised, applied and executed.”

Herbst said that to take the reduction back now after a few weeks would be “completely incomprehensible.” Hoteliers “must be able to believe our words and trust our acts.”