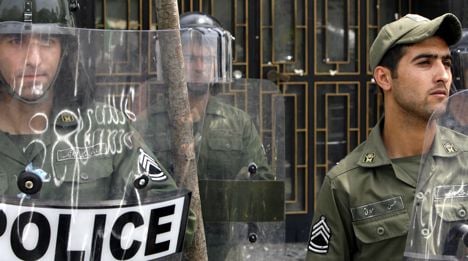 The report, to appear Monday, follows an Iranian claim to have arrested two German diplomats for allegedly having a hand in deadly anti-government protests last month as relations plummet between Berlin and Tehran.

According to Der Spiegel, the policemen had been subject to checks by their Iranian counterparts and one had email exchanges with an Iranian woman said to be close to the opposition monitored by intelligence agents.

Their role in the Ashura incidents “has been established by the Islamic republic of Iran,” the official said in a separate ISNA news agency report, with specifying whether the diplomats were still detained.

“No German diplomats were arrested on December 27 last year,” German foreign ministry spokesman Andreas Peschke told a Berlin news conference. “If the accusations turn out to have been made, we reject them categorically,” Peschke said on Wednesday.

At least eight people were killed on December 27, when tens of thousands of opposition supporters protested against President Mahmoud Ahmadinejad in what turned into the bloodiest clashes since his disputed June 12 re-election.

Iran charged Western powers with fomenting the unrest and expelled two British diplomats. Iranian officials revealed they had detained a Swedish diplomat for 24 hours on December 27, the final day of the Ashura rites.

In Wednesday’s reports, the deputy intelligence minister said Iran would “diplomatically protest to the German embassy in Tehran through the foreign ministry.”

The official alleged unidentified German diplomats set up a network of young Iranians to collect information on events in the country, adding members of this network had also been arrested. “This network was affiliated to the German intelligence service,” he said. “The riots were pre-planned and the ‘current of sedition’ (anti-government protest movement) and the network affiliated to Western intelligence services were involved,” he said on the official news agency IRNA.

German industrial giant Siemens said it would stop signing new business deals in Iran from mid-2010 as tensions grew between Berlin and Tehran.

On Tuesday German Chancellor Angela Merkel warned that time was running out before the international community considers sanctions against Iran, adding that February would be the “crucial month” in the UN Security Council.

Sanctions on Iran for its alleged attempts to develop nuclear weapons would only work if applied “over the broadest possible basis,” Merkel added, following talks with Israel’s President Shimon Peres.